Neolithic barrow or tumulus sites are being lost at an alarming rate in the Netherlands. Development projects for housing and industrial use employ archaeologists who excavate these ancient sites, often leveling them in the process before they are paved over to accommodate the development. 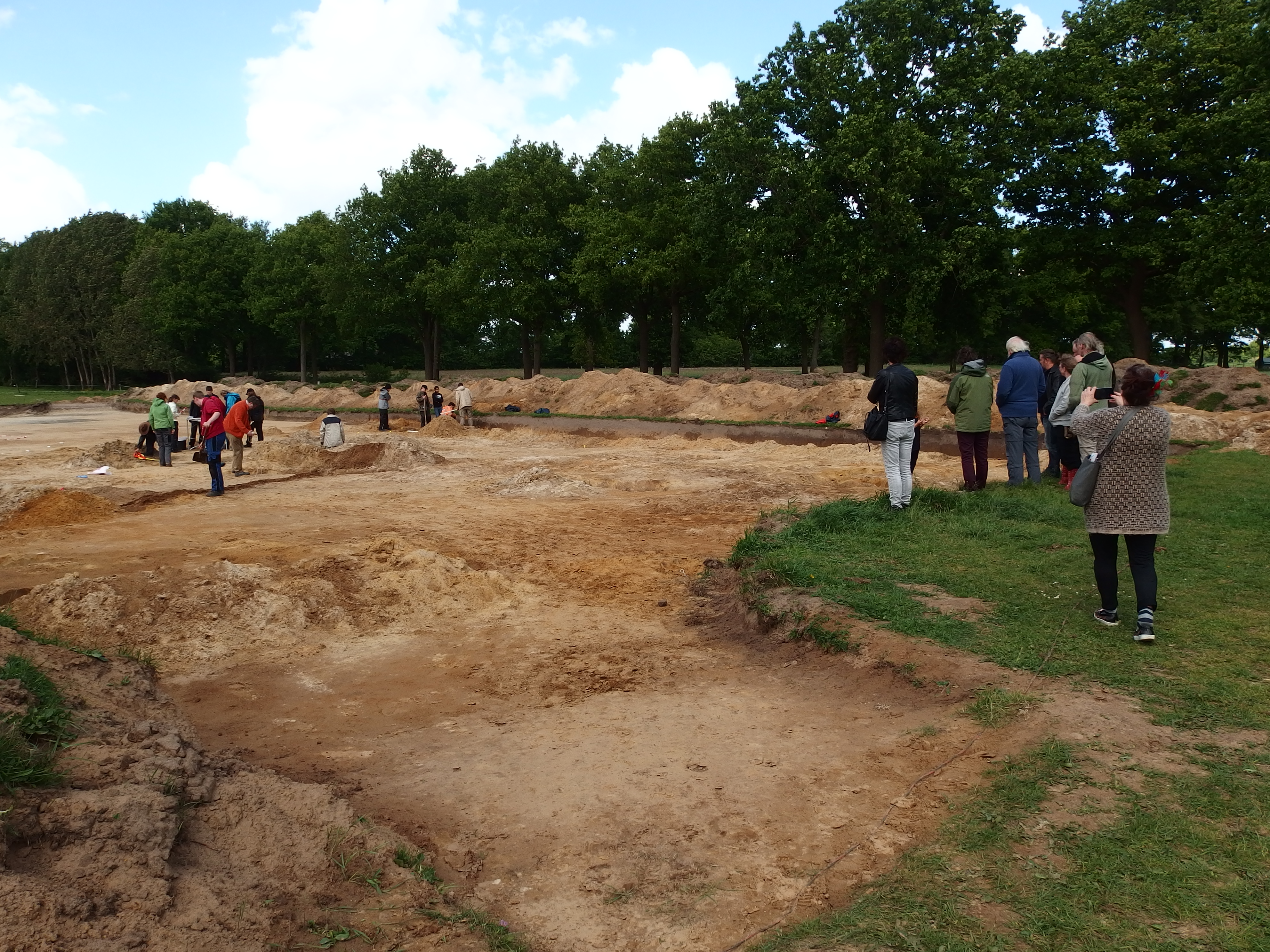 Such is the case in Dalfsen, located in the province Overijssel, where during the process of building a housing project, 120 graves were discovered from the Funnelbeaker culture. The acidic soil had long ago eaten away at the skeletal remains leaving only shadowy, ghostlike images. The people buried here lived approximately 3400 to 2700 BC, were makers of hunebeds, or dolmens.  Beside the burials were grave goods including the elaborately decorated pottery for which the culture was known. 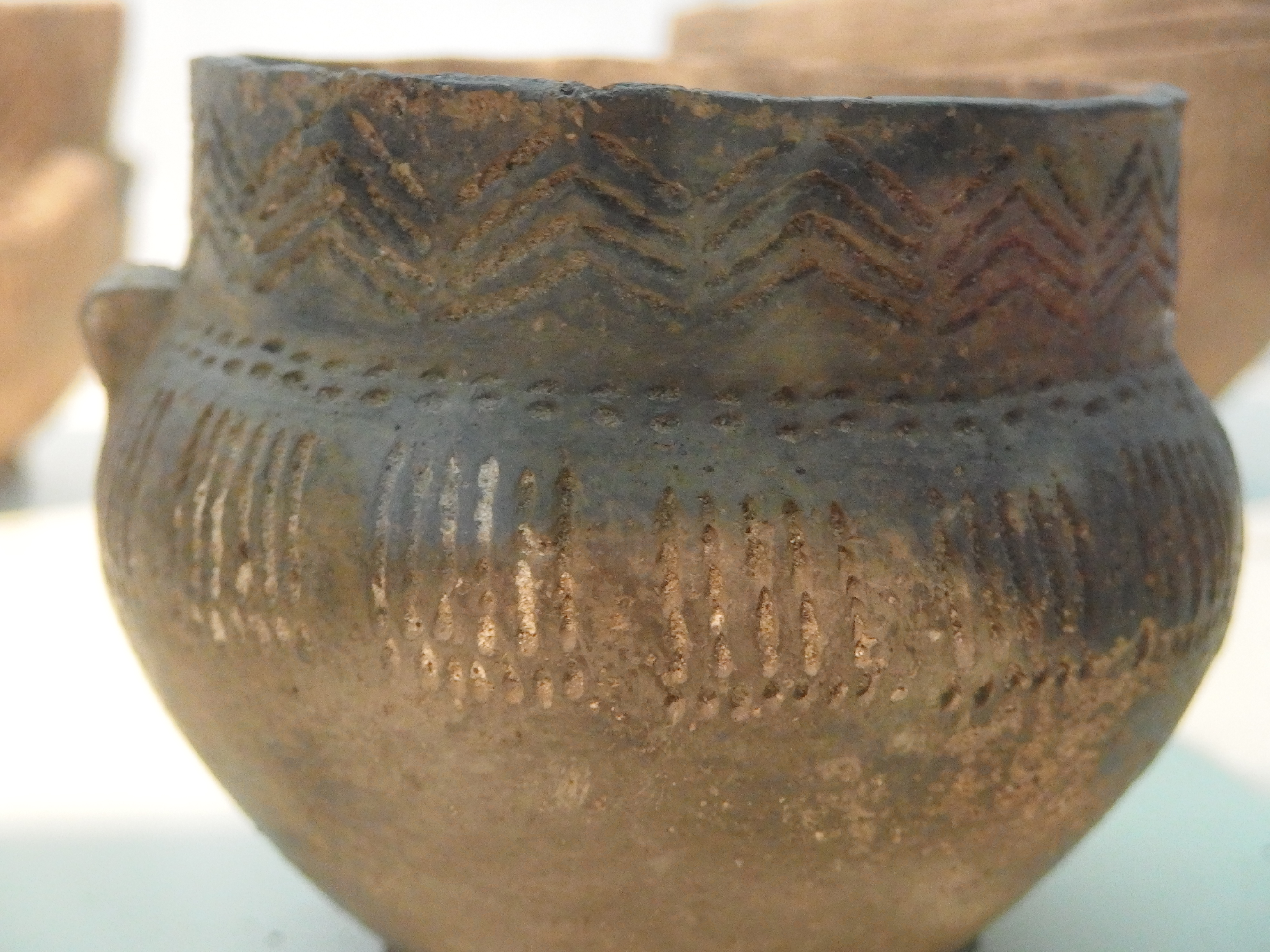 According to ADC Archeo Projecten (ADC), the archaeological firm chosen for the dig, the burial site measured approximately 120 X 20 meters wide and and included remains of an earthen monument, which was marked by an oval ditch measuring around 30 X 4 meters wide or approx. 98 X 13 ft.) This aspect of the site was located in the center of the burial ground. The monument would have looked like a dolmen or hunebed, not of stone., but made out of earth, with a remarkable raised platform for staging rites. All finds were south of a 5000-year-old sand road, the so-called Middenweg, which disappeared during the 1960′s due to land consolidation. Along this road the dead were transferred for burial. Postholes indicate a Stone Age farmhouse, measuring approximately 12 meters long, with a burial found near the mound. The oldest finds at Dalfsen are Mesolithic flints dating from between 8800- 4900 BC.

Daan Raemaekers, of the University of Groningen, commented on the importance of the discoveries at Dalfsen. His colleague, Henk van der Velde, manager of ADC Archeo Projecten, a firm that conducts about 500 excavations a year, stated on Dalfsen.net, “The discovery of this graveyard is not only important for Dalfsen and Overijssel, but it even transcends the national interest.” Although this was presented as the largest grave field of the Funnelbeaker culture in North-West Europe, the site will not be saved. Neither Raemaekers, nor ADC Archeo Projecten, recognizes the earthen monument as sacred, despite the fact that it was a burial site.  The cost to excavate and level the sacred mound was estimated at US $720,870, the amount paid to ADC Archeo Projecten.

Municipal authorities and Dutch archaeologists usually do not inform the wider public until after an excavation is finished, so there is no process for voicing opposition to the development project. The discovery of such a large Funnelbeakers burial ground in Dalfsen changed all that, and the news was reported on television while the dig was ongoing. The finds at Dalfsen were presented as new discoveries, however, the excavation appears to have been started earlier this spring, the first Funnelbeakers having already been dug up during February. If the public had known about this important site in February, then perhaps it could have been stopped and the site preserved. The manager from ADC, Henk van der Velde, reported that they kept the excavation secret because of the fear of looting.

Once the news broke on Dutch television there was such a large interest by the public that authorities felt compelled to open the site for a one-time only public viewing. A member of Sacred Sites International, has provided a first-hand account of the so-called Visitor’s Day, which he attended on May 28, 2015.

On a journey to the Funnelbeaker site, our member first traveled to the forest of the Veluwe, (province Gelderland) where two preserved barrows were visited. They are part of an approximately, 6-km-long alignment, that is probably lunar oriented. This visit was designed to view barrows that were naturally and respectfully preserved in contrast to what had been done at the newly excavated Funnelbeaker site in Dalfsen. 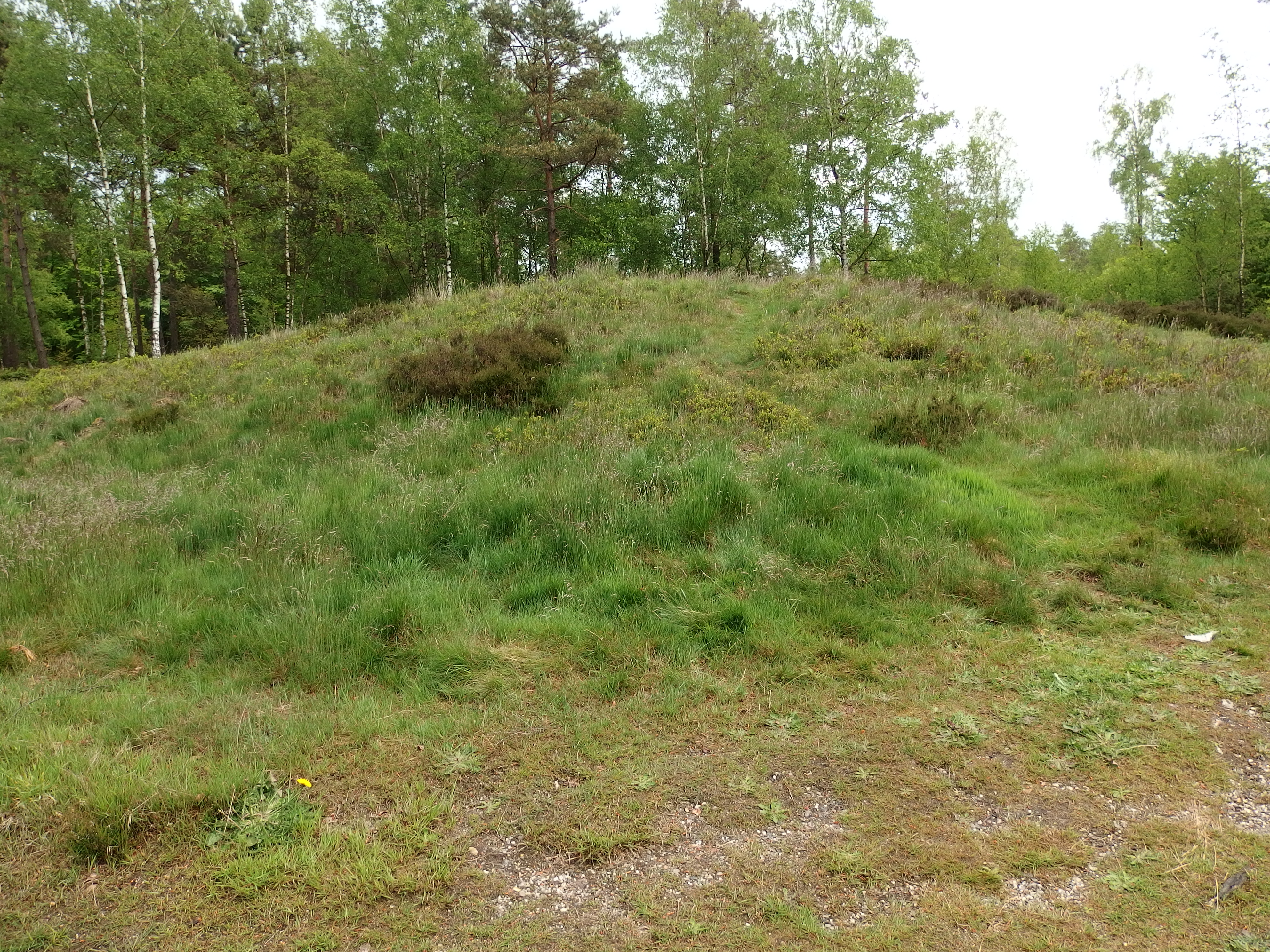 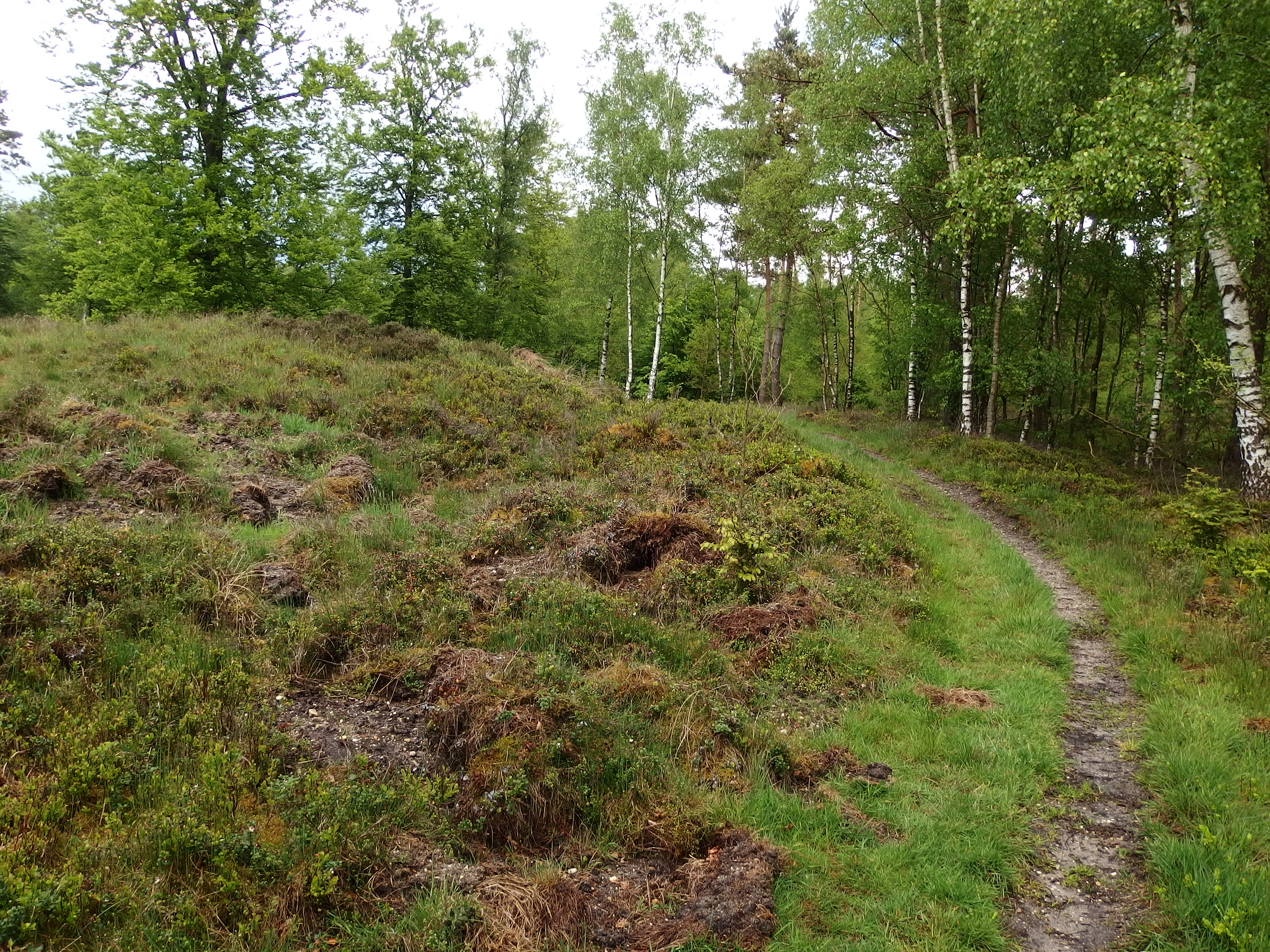 Thousands of people flocked to the site on visiting day, which was advertised thusly, “Ontdek het grootste grafveld van de hunebed bouwer”s (Discover the largest gravefield of the hunebed builders). There wasn’t much to see – all visible traces of the ancient monuments had been erased. 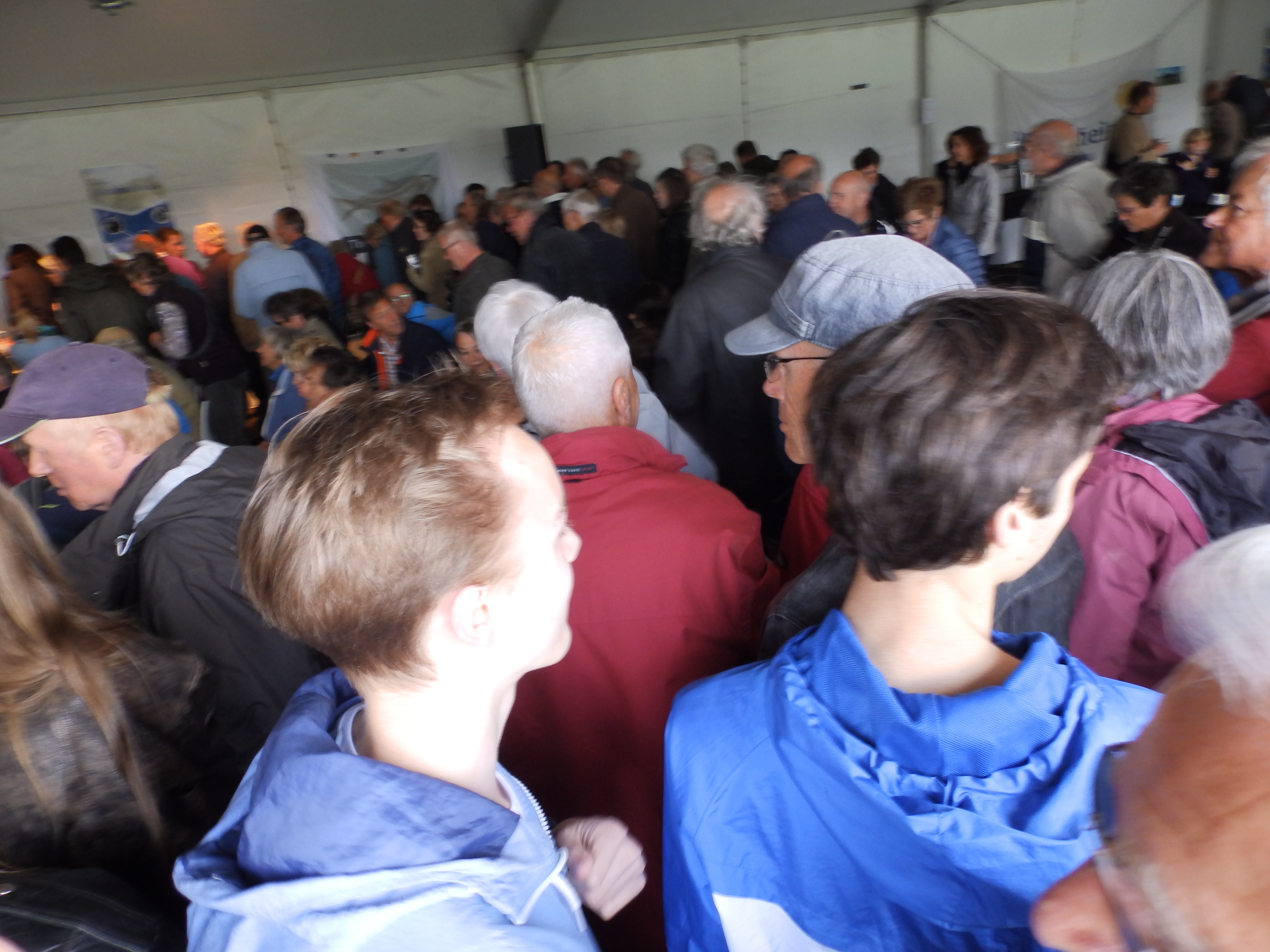 ADC Archeo Projecten, despite being a professional archaeological firm, had contracted with students to do the physical labor involved in the archaeological excavation. There were some young students from the University Groningen digging a trench, and recording information for teaching purposes or merely just for show, however, the actual excavation was over. The students participating in the excavation were from Saxon High School and the Missing Link Mangers for Archaeology.

Daan Raemakers, from the Archaeology Department at Groningen, was also involved with the Funnelbeakers site which may indicate the elaborately decorated pottery found at the site will be studied at his University, along with the amber chains, polished axe, and flints.

The Visitor’s Day included a slide lecture which was given on the findings by Henk van der Velde. To the side stood glass cases with some of the relics taken from the site, amber beads, stone axes, and the amazing Funnelbeakers pots, of which 120 were excavated. 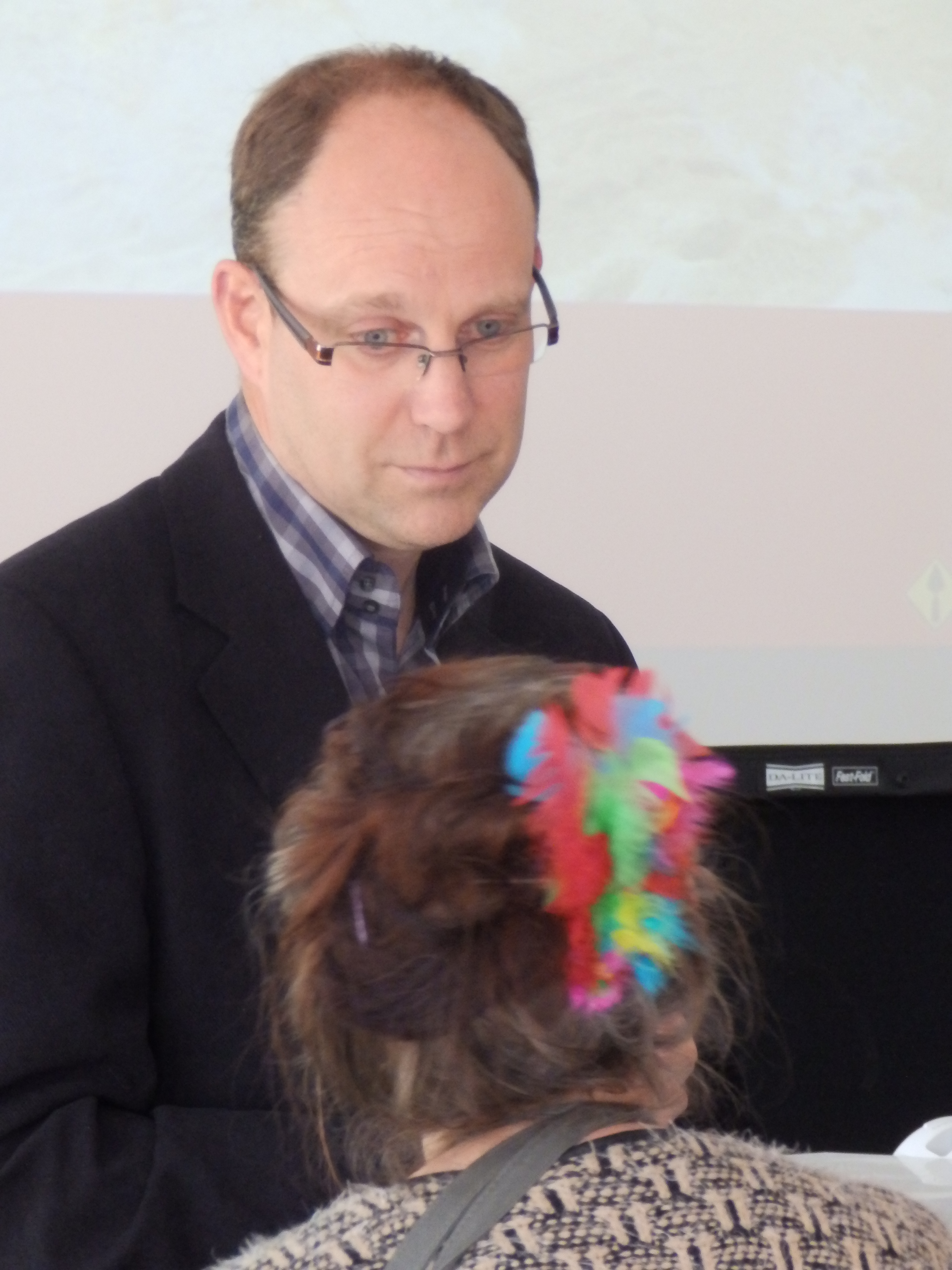 In fact, Mr. van der Velde appeared at a television talk-show where he actually passed around some of the pots for participants to hold. Of particular interest was a very small, decorated pot that was taken from a child’s grave. Imagine what would have happened if someone had dropped the fragile, low-fired pots.

When the presentation over, Van der Velde was asked whether anything would be saved or consolidated for posterity. He replied: That’s impossible. It is regrettable that consolidation such as what was done at Woodhenge in England where concrete was poured into the ancient post holes. This, at least, leaves a sense of what was there and preserves the orientation and layout of the site.

When asked if he had contacted the Mayor of Dalfsen, to discuss with him the possibility of consolidating the ritual platform, sacred center of the Stone Age site, he was at a loss for words. Surely the plans for houses and new neighborhood could be modified somewhat, so that this ancient memorial heritage would be saved?

It is important to be aware that the Netherlands signed the Treaty of Malta, (Valetta, 1992)  in 1998 the Treaty was agreed upon by Parliament and was merged with the Law for the Care of Archaeological Monuments (2007). The Treaty or the European Convention on the Protection of the Archaeological Heritage stipulates several points of interest;
Preamble: Considering that the aim of the Council of Europe is to achieve a greater unity between members for the purpose, in particular, of safeguarding and realising the ideals and principles which are their common heritage.
…….the need to protect the archaeological heritage should be reflected in town and country planning and cultural development policies.
Definition of the archaeological heritage, Article 1.
1) The aim of this Convention is to protect the archaeological heritage as a source of the European collective memory and as an instrument for historical and scientific study.
i. the preservation and study of which help to retrace the history of mankind and its relation with the natural environment.
Article 3, a, to prevent any illicit excavation or removal of elements of the archaeological heritage.
b. to ensure that archaeological excavations and prospecting are undertaken in a scientific manner and provided that: -non – destructive methods of investigation are applied wherever possible;
-the elements of the archaeological heritage are not uncovered or left exposed during or after excavation without provision being made for their proper preservation, conservation and management.
Several Dutch archaeologists have repeatedly ignored and violated the above stipulations.

The path to destruction took years; the city of Dalfsen had a covenant with the province of Overjissel that gave them final approval. It began on September 27, 2010 when the Municipal Council of Dalfsen presented their “Structural Vision” for building 900 houses. The municipality of Dalfsen noted that the housing site had “high archaeological expectations” after exploratory drilling revealed human remains/burials. For four weeks, the municipality of Dalfsen provided the citizens with insight to their development and building plans and ultimately concluded that the project had sufficient public support and the Municipal Council agreed upon the project.

According to Dalfsen’s Archaeology Policy, because of “high archaeological expectations,” an archaeologist had to be employed.

a)     The commitment to meet technical regulations by which archaeological values in the ground can be preserved.

b)    The commitment to carry out an excavation.

c)     The commitment for the work or workings that lead to ground disturbance should be guided by an expert in the field of archaeological care of monuments which meets the standards set by the mayor and high municipal officials for the permit to meet specific qualifications.

ADC Archeo Projecten, the firm chosen to perform the excavation of the building site, presented the Municipal Council with three options for their dig and when asked by the Council which would be best, ADC recommended the second of the three, US $720,870. – the most expensive option.

At present, the public has not received any access to a ground plan of the sacred site showing what the site looked like before excavation. A ground plan, for example, could help shed light on what the orientation of the sacred monument might have to lunar and solar alignments. Sadly, the ground plan is believed to be in a database that is accessible only to archaeologists. 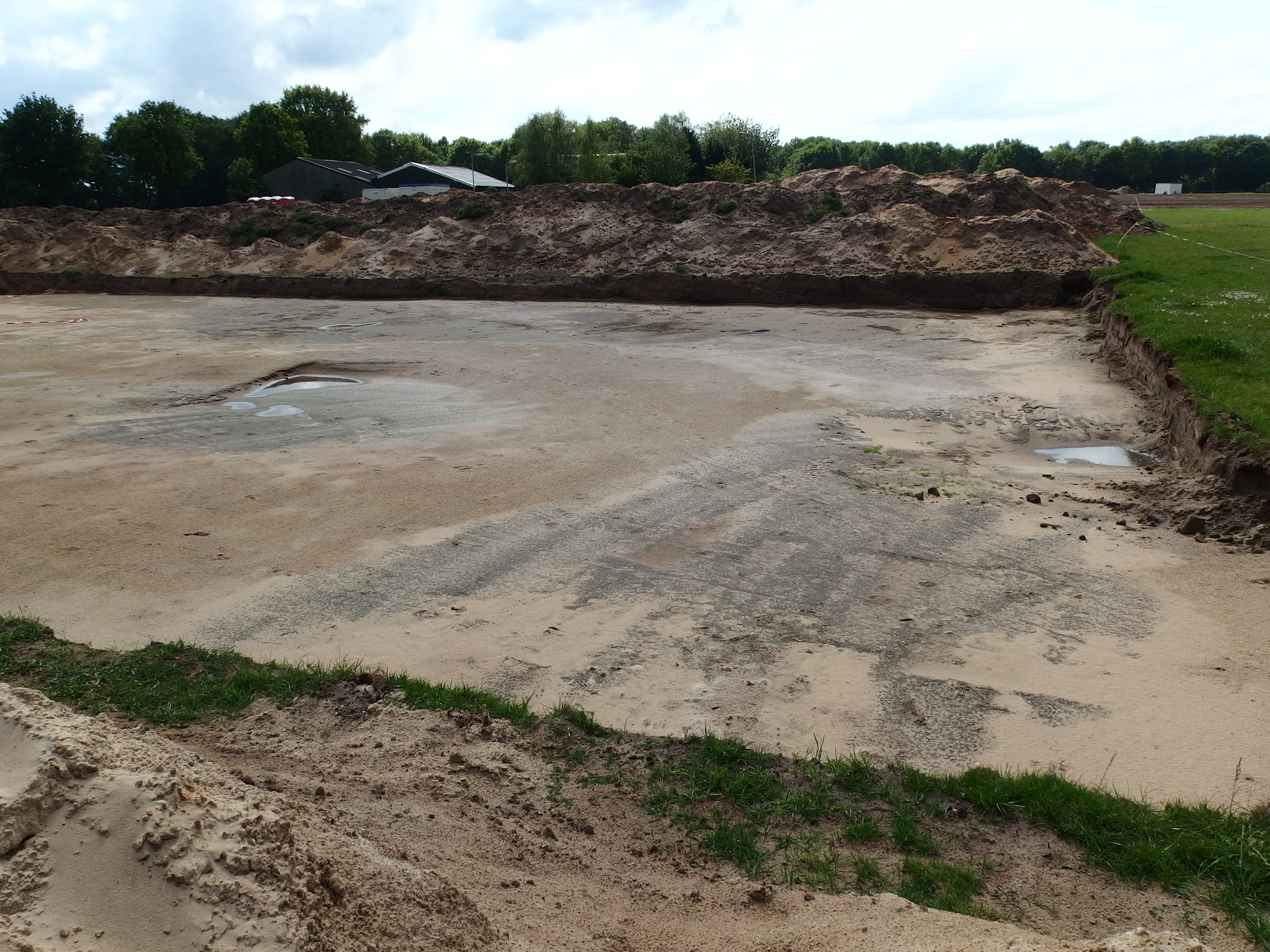