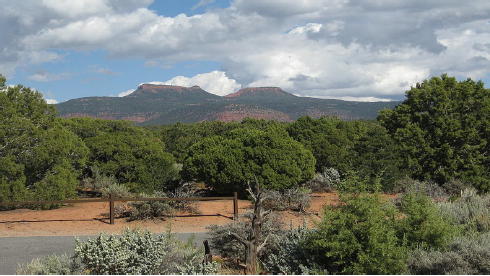 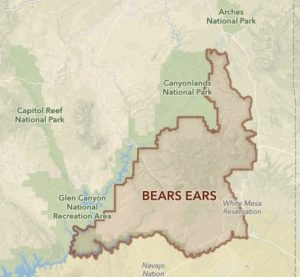 President Donald Trump approved the U.S. Secretary of the Interior recommendation for a significant downsizing of the land included in this National Monument in October of 2017. As reported in the Washington Post, Trump plans to reduce the monument to two or three small places. Such a reduction of the monument’s land leaves vast areas open to oil and mineral drilling and cattle grazing. This has the potential of destroying the sacred qualities of the place along with sacred sites and artifacts.

Who Considers It Sacred?

The Indian tribes who regard Bears Ears as sacred have oral histories about the ears of a bear, manifest as two prominent towering forms looming above the mesa.

It is estimated that there are over 100,000 significant cultural and sacred sites which can be found throughout the extensive monument. These include ancestral cliff structures, ancient surface structures built from rock and ancient Diné Hogans. There are also hunting and gathering territories used to gather sacred plants for ceremonies, and incised rock sites that tell the history of the Native Peoples who have inhabited the lands included in the Bears Ears National Monument.

The Inter-Tribal Coalition website has information about the various regions of Bears Ears and photo slideshows.

In mid-September 2017, U.S. Secretary of the Interior, Ryan Zinke, delivered his “Final Report Summarizing Findings of the Review of Designations Under the Antiquities Act.”

Zinke’s report states, “It appears that certain monuments were designated to prevent economic activity such as grazing, mining and timber production, rather than to protect specific objects.”