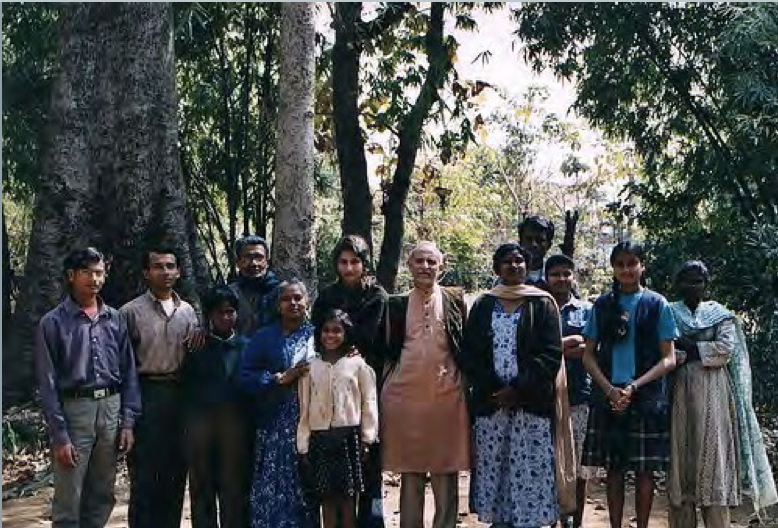 A Site Saver and His Family’s Story

I was born on August 31, 1941, in the small town of Hazaribagh, India which is surrounded by jungles. I spent my early childhood with our tribal people in the jungles where i developed my deep love and knowledge about the tribal folklore. I also developed an understanding of the deeper spiritual significance of tribal life and its meaning even though it can never be experienced or understood in the same sense by non-tribal people. For our people, the bears and tigers and wild deer are brothers and sisters. The elephant, because he is so big, is considered a symbol of strength. Everything is deeply associated with the environment that we live in, the forests surrounding the village, wild animals and birds, the fields and rivers, and the various kinds of fruit trees in the village. These things give us food, medicine, shelter, and out of them our folklore and songs and dances are woven.

From them our laws and spiritual beliefs have grown, and without them we are nothing. Our children grow up learning about these things from us, and our stories are our history and literature and these, form the sacred book of knowledge for us even if it is not all written down. We can not allow this priceless knowledge to be lost and we cannot allow this environment to die without losing everything that is connected to it in such a deep way.

When we saw that the government did not care about preserving and protecting our environment, but rather, looked at our environment as a forest or mineral resource to be exploited, we became hurt and angry. All our people are not educated like I am, so it was my work to do the fighting against the destruction being done by the government under the pretext of developing the tribal people.

We have been influenced by Christian missions for over a century and have looked at the missionaries as an ally against the government’s policy. But some of our elders became aware of the missionary’s motives of also exploiting us in a different manner. They brought us schools and education and new values and ways of living in an urbanized environment that we are not used to. They also made us learn their religion and study their language and history. IN this way we found our old traditions given new forms and meanings. In this way, the missionaries were no better than the government. The land is sacred to us because of who we are. Our ancestors tell us our creation stories that say we were the first people on the earth. This idea forms the foundation of our religious beliefs.

My greatest inspiration was my own mother. She was an example of tolerance and sacrifice and endured pain happily to help others.  From her i learned the meaning of the willing acceptance of pain. Our strength as a society is our ability to weep and toil. This is our elders’ vision of the higher reality surrounding us everywhere in nature. Greedy modern materialistic societies are blind to this because of their sense of self-gratification. From my mother I learned a superior vision of the earth as a mother – a nourisher, a provider. We do not see nature as a hostile environment to be either feared or exploited. To us it is Mother.

When I reached the age of forty I was an art teach in a local polytechnic school on a very modest pay with a large family to support; it was hardly imaginable I could take on the addition burdens of my community. But, when we were driven to protect our valleyt from the miner’s machine – the strength simply came. We could not bear to see our burial grounds and sacred groves uprooted. I gave up my teaching job and became a full time environmental activist, even though it was far from easy. But, we had as a family, a new and inspired strength, and a purpose which or life did not have before.

My mother died in 1989 leaving us alone to continue the fight with the government against the destruction of our entire region. Jharkhand is very large area with hundreds of villages, several thousand square kilometers of forests containing all kinds of wildlife. Dozens of rivers and hill streams had to be saved. In these villages and hills lay the scattered remains of our ancestors and the rock art that they painted and left for us in the caves from the ice age. When we think of these things we feel strongly that we can never allow our sacred places to be destroyed for any reason whatsoever. In these places we see the presence of our people, our ancestors, our roots.

When we found that archaeological importance was being given to our sacred sites we were elated, because outsiders cannot understand the sacred relations we have with these places and the surrounding sacred landscape. To us the hills have human forms, the trees of the forest are living beings, the wind’s voice is of a near one. All these constitute our sacred sites and give meaning to our culture. We cannot accept that a sacred grove or a megalithic site can be relocated. Like a flower, megaliths are products of their environment; their meaning is in their location. When we want to show our children our place in the world, we need to have some mapping points. This gives us an idea of where the spirit is. We need to be able to tell our children, “Look at that Mother Hill and worship it;” or, “Stop by the megalith outside the village and be silent for there you will feel the presence of our Ancestors, and our presence when we are gone…”

This then is why we gave up the normal materialistic longings of an educated family and all of us turned inward to protect our roots. We feel very happy our projects to save our region and protect its cultural heritage have been so well received. Many people call us the “Bulu tribe,” and in a way that is perhaps how all tribes started.