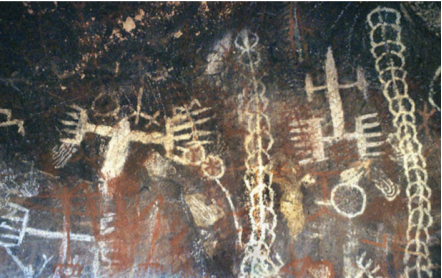 Who considers it sacred?

The ancestors of the Chumas and the Gabrielino Tribes, and the Fernandeno Tatavian Band of Mission Indians.

Why is it sacred?

It is on 2,849 acres of land that once was owned by Boeing for what was known as the Santa Susana Field Lab; leased to Rocketdyne aerospeace company, along with another tenant, the U.S. Department of Energy. The site was used as a nuclear research facility and for testing rocket engines. The Chumas sacred site was closely guarded and even employees did not know its location, making it one of the best-preserved rock paintings in the country.

The U.S. Department of Energy & NASA (National Aeronautics and Space Administration) had to do extensive cleanup to rid the site of nuclear waste from nuclear meltdowns, carcinogenic dioxins, and heavy metals. The cleanup by the North American Land Trust and is protected as open space. The 2300 acres of land is restricted from farming, hunting, housing along with ranching and any other kind of development.

The Santa Ynez Chumash tribe manages the site and its location; they strictly control who may visit this sacred site. It is a ceremonial site and is only visited by Chumash head holy healers and tribal leaders.