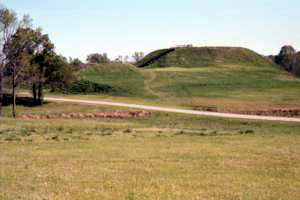 The Temple Mound by Deborah Vess

The Friends of the Ocmulgee Old Fields, in Macon, Georgia, opposes the proposed Fall Line Freeway which would bisect sacred lands known as the Ocmulgee Old Fields and the “Reserve Tract.” In the oral tradition of the Muscogee people, these lands are their place of origin, first described to Bartram as, “the place where we first sat down.” The lands were made sacred by this history, and by the many mounds, ceremonial squares, and burial grounds contained here. These lands were also the place or origin of the Muscogee Confederacy of tribes which eventually became the Muscogee (Creek) Nation. Finally, the lands are called the “Reserve Tract” because the “mekkos”, or chiefs of the tribes of the Confederacy, swore to each other to reserve these lands from all treaties. Principal Chief McIntosh violated this pledge and was executed. In the thirties, all of the remaining Old Fields were to be incorporated into a National Monument. Unfortunately, no federal monies were available and the monies raised locally were sufficient only for a large northern section and one southern section known as the Lamar Mound site, one of the few remaining spiral staircase mounds in the world.

The proposed route of the Fall Line Freeway would pass between these two sections and thus bisect the original Old Fields. Currently, and after years of bitter fighting, Georgia’s Department of Transportation has submitted to the required 4(f) study in which it must demonstrate that there are no feasible or prudent alternatives to the proposed route. Most recently, the Keeper of the National Register determined that the Old Fields are eligible for listing on the Register as a “traditional cultural property.” These are the first lands east of the Mississippi to receive this classification.

We will need the help of the members of Sacred Sites International later on in the process. If it appears that opponents of the proposed route are prevailing in the 4(f) study, there is a substantial chance some congressional representatives will seek legislative exemption of the project from the 4(f) requirements. The best way to fight this is to make the exemption as public (and as embarrassing) as possible. 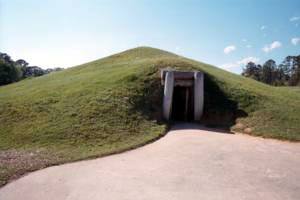 The Earth Lodge by Deborah Vess

Jack Sammons reports that the Ocmulgee National Monument recently hosted its annual Ocmulgee Indian Celebration and, for the first time, Muscogee Elders came back home (from their resettled home) to participate in a significant Tribal Dance.

We have learned, in addition, that the Georgia Department of Transportation submitted its second Draft Environmental Study and it retained its initial recommendation for a route that would bi-sect the sacred Old Fields. This has been met with much criticism.

Please write letters for the Old Fields to remain whole and un-bisected:

New information was reviewed by the National Park Service that has strengthened the case for the Ocmulgee Old Fields as a Traditional Cultural Property as the determination of eligibility request submitted in June of 1999 concluded. The Old Fields, impressive mounds, have a long association with the traditional beliefs of the Muscogean people as a place of origin. (See Site Saver, Fall 1997)