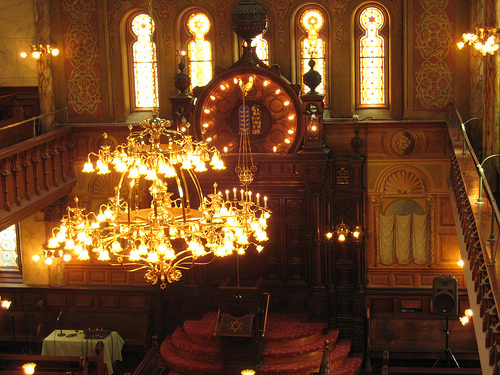 Significance: The Eldridge Street Synagogue was built in 1887 as the first house of worship built by Eastern European Jews on the Lower East Side of Manhattan. From time of its 19th century opening, it has been a symbol of the religious freedom and economic opportunity sought by so many immigrants in America. It served as the center of social and religious life for thousands of immigrants during the peak of Eastern European migration to the United States. It was where people came to learn English, find a job, get a meal, talk to a friend, and generally assimilate into the American way of life. It is the most significant remaining marker of the huge Jewish community that flourished on New York’s Lower East Side from the 1850s to the 1940s. It is also an active place of worship with an unbroken line of congregations dating to 1887.

Description Pre-Restoration: As described by Adam Gopnik in the New Yorker, December 10, 2007, “Decades of enforced neglect had left the sanctuary sealed off and with pigeons roosting in its rafters.” “[It was] …like the Twilight Zone. The room was covered with dust. There were prayer shawls strewn about, and ceramic spittoons on the floor…In the ark were thirty Torahs, in various stages of decomposition.”
<>The main sanctuary had been boarded up for almost forty years. Stairways collapsed, rain leaked through the roof and damaged walls and fixtures. Stained glass windows were broken and their leading had softened causing the glass to fall out. The interiors had been painted over, the plaster was delaminating and it was infested with mold. 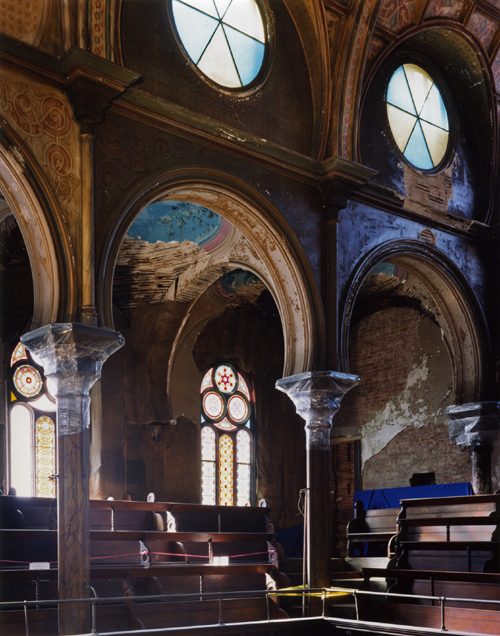 Description Post-Restoration: The exterior of the synagogue has been restored to its 1887 appearance with Gothic, Moorish and Romanesque elements and the interior brought back to its 1918 state of opulence. It exhibits the ornate style of the larger European synagogues and also echoes the great cathedrals, with a huge rose window, displaying a Jewish resonance. The twelve roundels of the rose window are thought to represent the twelve tribes of Israel and the five keyhole windows, to symbolize the five books of Moses. Stars of David decorate the windows and other elements of the façade. 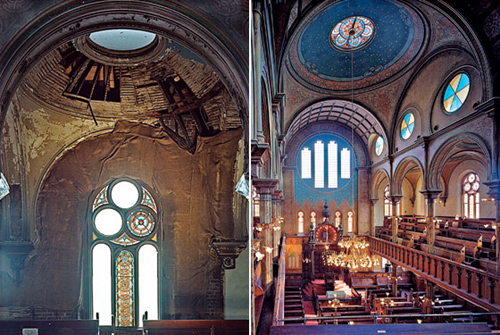 The interior has undergone a $20 million restoration, completed in 2007, and spearheaded by the Friends of the Eldridge Street Synagogue that is now known as the Eldridge Street Project. The restoration has brought back the color and grandeur of the original hand-painted walls and ceiling, the delicate stained glass windows and myriad of murals throughout the traditional (men downstairs and women upstairs) seating arrangements. Special artifacts include the hand-carved walnut ark, the reader’s platform centered in middle of the synagogue in the old European fashion, and the opulent brass lanterns.