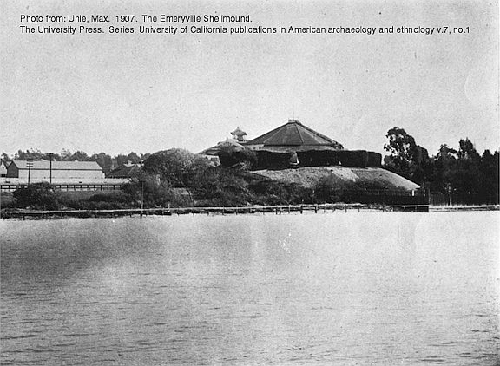 Significance: The Emeryville Shellmound was a highly remarkable historic, cultural, and sacred site established by Ohlone Indians over centuries of use from 500 B.C. to approximately 1700 A.D. when the Spanish missionaries imprisoned the Ohlone. The Ohlone built their villages on the mound and buried their dead there, creating over the centuries a sixty-foot high mound with a diameter of about 350 feet; it was the largest of nearly 400 mounds ringing what is now called the San Francisco Bay. In addition to its large central cone, the mound had several smaller cones.

These mounds, referred to as shellmounds or shell middens, were comprised of abalone, mussels, and clamshells, staples of the Ohlone diet, along with sediment, ash, and rocks. Over time the mounds grew larger and taller from successive use with an accumulation of shells, animal and human remains, ceremonial burial objects, artifacts from everyday use, and architectural remains.

The Emeryville Shellmound, like others in the Bay region, was a significant cultural site infused with sacred as well as secular meaning. The mound functioned as a mortuary for long-term burials. Excavations by archaeologists in 1924 reported over 700 burials, which were subsequently removed from the site. Most of these remains have been housed at the University of California at Berkeley and have not been repatriated for reburial. In addition,”…physical remains (houses, artifacts and other materials) of past people who were probably revered as ancestors by the living [were found]. The repeated construction and use of the mounds forged a direct link between the living and the dead. Bay Area peoples dwelled on top of mounds whose cores encapsulated the sacred remains of their ancestors going back many generations…” (Lightfoot: 1997) The cultural significance of the shellmound was also very important. Burials functioned in a cultural way to establish genealogies and therefore territorial rights. Another cultural function of the mounds was as cultural markers. Villages situated on top of the mounds were highly visible and therefore distinguished the different Ohlone communities throughout the bay. The mound’s significance to Ohlone descendents remains of central importance, even if the site has been altered over time. Very few sacred and cultural sites remain, especially one as great as the Emeryville Shellmound.

Condition: The mounds were partly destroyed in the 1800s to make way for an amusement park, a dance pavilion and a racetrack. Archaeological excavations at the turn of the 20th century also degraded the site. The development of Emeryville as an industrial site occasioned the near-complete razing of the area.

From the late 18th century to the first quarter of the 20th century, the Emeryville Shellmound was in private hands. The city of Emeryville had begun to grow and industry began to overtake the landscape. The shellmound was leveled in 1924, when an amusement park and dance platform on top of the mound was closed. Steel mills, paint factories, canneries and insecticide plants occupied the site for 70 years.

Archaeologist Alan Pastron, investigating before the buildings of a shopping center in the late 1990’s, found the site highly significant and recommended a full-scale excavation that was not undertaken. In the meantime, the city of Emeryville shifted to a high-density retail and residential development model. A retail project came under consideration for the land where the shellmound once stood. When grading the site for a shopping center, burials were discovered amid the toxic soup leftover from earlier industrial use. It appeared that nearly 8 feet of the mound still existed, filled with hundreds of Ohlone burials, despite the fact that it was thought to have been destroyed in 1924.

The city of Emeryville was mandated by State Law to call Ohlone descendents to monitor the site and determine what to do about the burials: leave them in situ or move them for reburial. Many of the burials, unfortunately, had to be sent for incineration at a toxic waste cleanup facility because they were declared toxic from previous industrial use. Parts of the site are considered so toxic that the soil must be shipped to Texas and burned (along with the Ohlone burials still extant).

The site was sold to a developer, Madison Marquette, who proceeded to prepare the site for building. The shopping center was built and now chain stores such as Old Navy, Pottery Barn and Banana Republic, sit atop what was once the largest village and burial site in the San Francisco Bay Area.

Attempts to Save the Site: Sacred Sites International, scholars, and city of Emeryville residents sought to preserve the site as a natural memorial park. The site could have been “capped off” with cement, topsoil brought in, landscaping developed and an official memorial and educational center built on the site. The city of Emeryville declared that such a plan was not possible because the site had been toxic and, therefore, had to be “capped off” and built upon. A scaled-back memorial was proposed when it appeared that leaving the entire site in a natural state was not possible. It was stipulated that the developer scale back the shopping center and invest $800,000 to build a small natural memorial at the entrance to the shopping development. The memorial consists of a granite timeline of Ohlone history, a small symbolic mound and sculpture based on Ohlone baskets.