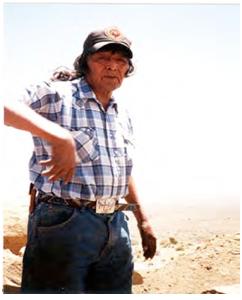 We first met Eugene Sekaquaptewa in 1991 when we visited the Hopi Mesas on a Sacred Sites International study tour to Northern Arizona Indian sites. He was from a progressive family and we learned about his parents and their lives through reading the life story of his mother, Me and Mine, as told to Louise Udall. Eugene’s family believed in education and he became a teacher, as did his brother, Emory, whom we also met.

Eugene walked in both the Hopi and the “white” worlds; he was a leader of his medicine lodge with the Eagle Clan.

He taught us to recognize ceremonial kivas and respect them by not walking on or near them. He also showed us the eagles his clan kept for ceremonies. A highlight of our tour was when Eugene took us to the Bacavi-Hotevilla school where all the students had computers and they were also schooled in the traditions of Hopi.

By Nancy and Leonard Becker