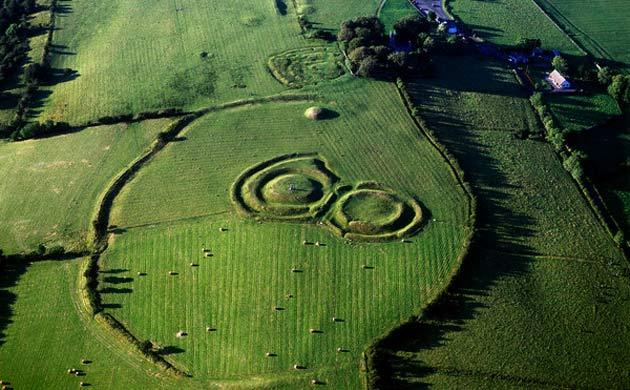 Who Considers it Sacred? The Irish

Details: Hill of Tara, dating from the Neolithic period, was a henge monument, such as Stonehenge and Woodhenge, used for ritual and/or astronomical observations. Recent excavations on the hill have uncovered post holes suggesting the hill was surrounded by a wooden palisade. 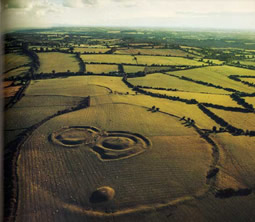 The site is featured in numerous stories as the abode of the most powerful Celtic god Lub and goddess Medb and the seat of the high-kings of Ireland. It is part of a vast sacred landscape associated with other well-known Neolithic monuments including Loughcrew, Four Knocks, Uisneach, and the UNESCO World Heritage sites in the Boyne Valley: Newgrange, Knowth and Dowth. It is estimated that there are 140 – 1,000 uninvestigated related sites in Skyne Valley. Tara Hill continues to be used ceremonially in present times.

Significance: The Hill of Tara (Temair in Gaelic) is the sacred ceremonial and mythical center of Ireland. The place-name being derived from the Greek “temenos” or sacred enclosure, tells us that this site was an important sanctuary and prehistoric sacred axis. Temair, in many ways, constitutes a physical manifestation of Irish identity rooted in the sacred land. It is a large circular earth mound, symbolizing the mother earth, with two large circular forms crowning its brow along with a number of specific monuments like the Lia Fail commonly known as the Stone of Destiny used in pre-Christian coronations. Temair is considered to be the sacred center of Ireland and is part of a larger sacred landscape in the Skyrne Valley and related to the nearby sites of Loughcrew, Four Knocks, Uisneach and the Boyne Valley, all filled with historic archaeological treasures. The Hill of Tara has also played a significant role throughout history as one of the Royal Seats and is considered to be the site of inauguration of the Sacral King. Being inaugurated at Tara bestowed the highest honor upon a king and accorded him a special dominance over other kings with a title of King of Tara. Central to the accord given Temair was the belief that Tara was the residence of the omnipotent Celtic god, Lug and his female consort, Medb. The site was thus chosen for inaugurations of kings at Tara and for the important festival, Feis Temro, associated with fertility where the king “slept” with the earth. Despite its pagan history, Temair continued to play a central role in the construction of a national history and the kings of Ireland continued to use the title of King of Tara into the eleventh century. Important military campaigns and political movements were launched from the Hill of Tara, as well, contributing to its position as a spiritual center for nationalist Ireland.

The Threat: The Irish government has embarked on a massive highway building plan, the largest in Europe. These roadways are threatening many ancient sites, including Hill of Tara and Skryne Valley. The M3 Motorway Scheme, as part of the larger development plan, proposes a 4-lane freeway through the Tara-Skryne Valley with an interchange just north of the Hill of Tara. Construction is scheduled to begin in early 2006.

Preservation Details:The M3 Motorway Scheme is a four-lane roadway that is planned to cut through the Tara-Skyrne Valley with an interchange immediately north of the Hill of Tara. The M3 Motorway is part of a massive development program that is rapidly replacing the sacred green countryside of Ireland with big box housing developments, strip malls, superstores and suburban sprawl, all connected by new roads-900 kilometers of them, making Ireland the leader in European building. When archaeological sites such as this are in the pathway, there might be investigative archaeology, but then they are bulldozed, despite promises to do so only after careful archaeology has been undertaken. The project speed seems to be accelerating perhaps to avoid the costs of archaeological investigation, or perhaps to stop the growing public disenchantment with the M3 Motorway Scheme. Ireland’s dependence on cars (the most car-dependent country in Europe) is what is creating the “need” for more roadways and threatening the Hill of Tara, along with at least 28 archaeological sites, despite public proposals to utilize more rail transportation. The Archaeological and Historical Society has been joined by scholars from around the world in protesting the inappropriateness of the M3 pointing to the noise and pollution that has recently been created by the roadway passing alongside Stonehenge. Tara is viewed not only as a national treasure but as a world-class archaeological site that should be preserved for future generations unharmed by the noise and pollution.

Nominated By: Tuatha: Carad An hEireanhn, The People: Friends of Ireland, an NGO based in North America

How You can Help: Please write polite letters to the following officials asking them to stop the M3 Motorway Project because of the sacred, historic, and archaeological landscape features present at Tara Hill and the Skyrne Valley.