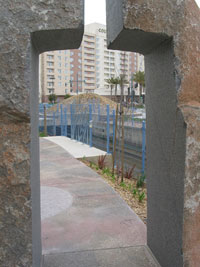 Remnants of the Emeryville Shellmound now lie beneath the South Bay Street Shopping Center. Hundreds of Ohlone Indian burials and the artifacts found with them during the construction of the shopping center have been reburied in the six feet of Shellmound that was rediscovered during the building of a high density shopping mall. The Old Navy store is planted firmly on top of what was once one of the largest and oldest shellmounds in the Bay Area. On the backside of the store, a memorial to the site has been created. The City Council of Emeryville mandated this memorial when Sacred Sites International began speaking against the building of the mall. We were told that the City of Emeryville had always been a commercial city and they would not change their plans to build another shopping center in order to preserve the Shellmound.

The memorial is a small park-like setting with a pathway along the concrete lined Temescal Creek. SSIF, on a recent visit encountered one woman and her child at the creek fence. They were mourning the treatment of the creek. The City of Emeryville promised to install a landscape of native plants along the creek, but none could be found. The woman felt the landscaping along with the artsy creek fence reflected an artistís concept, but certainly not a natural creekside environment. 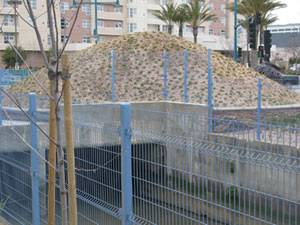 A small mound representing the shellmound can be found at the end of the path. It fronts a tiny plaza on the corner of Shellmound across from a large hotel. There is a cut-away of the mound depicting layers of sediment that might have been found in a typical shellmound. Shells are embedded in the bottom of the mound. A fountain flows from a few boulders into a pool lined with rocks. A large sculpture of a metal basket can be found on the side of the mound. This is a reference to the basket-making tradition of the Ohlone Indians. Brochures outlining a walking tour of the memorial can be found in a box mounted on the creek fence. The flyer includes a timeline side-view of the mound and identifies the various elements of the memorial.

The memorial is a sad reminder that Emeryville chose tax revenues over the preservation of a historic cultural site. No one stopped at the memorial, on the day we visited, or walked through the park. Shoppers hurried on their way passing by the chance to learn what came before this latest monument to the almighty dollar. 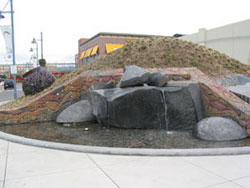 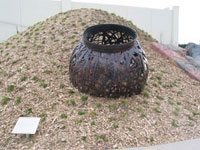