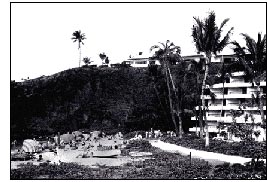 Significance: Native Hawaiians consider Keka’a to be the first place on Maui where the goddess Pele began her fires to build the island. Historian Abraham Fornander wrote concerning Keka’a in the 19th century, that thousands seem to have died there; he mentions bones and skeletons being in evidence, seeming to represent huge numbers of bodies. The native Hawaiians have also long regarded it as haunted and sacred to Pele.

Status: The Sheraton Maui hotel, built in the 1960’s, has defiled the Keka’a site by building on top of it.