In 1990 Congress formed Petroglyph National Monument located on the western edge of Albuquerque, New Mexico. The monument is an impressive 7,100 acres filled with an estimated 17,000 Indian petroglyphs dating principally from 1350 – 1680 A.D. Hundreds of archaeological sites span the centuries from Paleo-Indian (approximately 12,000 B.C.) to the present. A diverse community of desert plants and over one hundred different species of birds also enrich the monument. This unique monument is critically endangered by suburban encroachment, including plans to build four-lane and six-lane highways through the park. 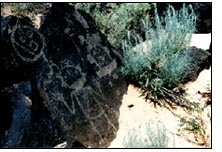 According to Polly Schaafsma, anthropologist and author of Rock Art of New Mexico and Indian Rock Art of the Southwest, “One of the major reasons for establishing Petroglyph National Monument was to preserve the thousands of petroglyphs within their original landscape setting. Rock art does not exist in isolation but in an unbounded, undelineated landscape. These outdoor images are an important statement of place, of people living in (as opposed to on) the land. They are a metaphor of connectedness with the earth, and the physical surroundings contribute to their meaning.”

The dramatic seventeen-mile escarpment of volcanic rock forming the monument is a landscape of historic and contemporary significance to the area’s Pueblo Indians and Atrisco land grant heirs. Pueblo ancestors covered thousands of black volcanic rocks spilling down from the Mesa with elaborate pecked or incised carvings. “This was a place where Pueblo ancestors wrote down the visions and experiences they felt.” Images of shieldbearers, flute-players, horned serpents, star-beings, birds and numerous masks grace the faces of boulders, hardened lava-flow coughed up by long-dormant volcanoes. Even though the glyphs are centuries old, Indians from all the Pueblos recognize the site as sacred, still visiting shrines within the monument to perform seasonal ceremonies.

Pueblo leaders, knowing their sacred places within Petroglyph National Monument are threatened, have gone public talking about the hallowed ground. According to Armadeo Shije, of Zia Pueblo, the escarpment area is considered a shipap or sacred center, “central to the great protector mountains of Sandia, Mount Taylor, Jemez, Manzano and Santa Fe. It is the center of great spiritual powers.” The petroglyph fields are considered to be” …the nerve center of the Pueblo culture, religion, and tradition….” 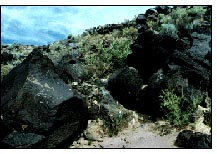 As described by Phillip Lauriano, Turquoise Kiva Leader of Sandia Pueblo, Petroglyph National Monument is a place where prayers “…go beyond the great divide to a reservoir of strength and power. Somewhere beyond the great divide, the spiritual is awakened… where all the communications come in to permit, to initiate, to officiate anything…asked by the prayers. The volcano… is the hopper… when anything is planned in the way of ceremonies… there are certain areas there where you make your announcement in the form of a prayer. And that is channeled into the hopper…somewhere beyond the great divide… It authenticizes the ceremony.” Some Hispanic heirs of the Atrisco Land Grant properties included in the monument also still go there for prayer and for gatherings.

The petroglyphs also play a central role in the spirit world which is the destination of the deceased. “…the entire monument area was referred to as “the volcanoes”…the location of spirit trails…traveled by spirits of the dead. The petroglyphs on the escarpment, the volcanoes, and the spirit trails are interrelated, forming a communication nexus to the spirit world that can be used by living persons to help their prayers and medicine…be more powerful.” Bill Weahkee, Executive Director of the Sandoval Pueblos, described the importance of the petroglyph fields to the spirit world: “Many things have been buried there over the centuries. These things should not be disturbed in any way as many of these items were placed there to accompany the deceased on his or her journey to the next world. The genuine and mostly ancient petroglyphs are an inherent part of the rituals used to signal the spirit world that one is on this journey.”

Despite the environmental, cultural and sacred significance of the Petroglyph National Monument, there are grave problems with its preservation. The monument is unfortunately known as one of the most endangered National Monuments in the Park System. It is located to the west of Albuquerque, directly in the path of the city’s most explosive growth area.

Just north of the monument lies burgeoning Rio Rancho with the huge Intel corporation. Intel’s 5,000 employees make it the second largest private employer in the greater Albuquerque area. These employees and other Rio Rancho residents have needed housing close to their jobs and access roads for faster commuting. The ensuing suburban housing developments, roads, powerlines, and pipelines have encroached on significant parts of the escarpment. The engraved rocks have also fallen prey to vandalism such as spraypainting and shooting. Previous trash dumping and off-road vehicle abuse have taken their toll on the Monument. More housing tracts and roads are planned, including the mammoth expansion of an adjacent airport.

An even greater threat to Petroglyph National Monument is the plan to cut a six-lane freeway, Paseo del Norte, and four-lane arterial road, Unser Boulevard, through the monument. The Paseo roadway, strongly advocated by Albuquerque’s Mayor Chavez, would create a 2100 foot long cut-and-fill freeway ramp. By the year 2010 it is estimated that each day the ramp extending over the monument would carry 21,000 vehicles, including large trucks. This traffic would slice northward through the Peidras Marcadas Alcove and the Sand Escarpment areas of the park, two of the finest areas left in the monument.

Polly Schaafsma states, “Modern cultural artifacts such as highways with their associated fencing, graffiti, trash, and signs –to say nothing of the traffic, noise, exhaust fumes, and visual impacts –destroy completely the setting as well as the purpose of the monument. People visit rock art sites for a variety of reasons, and these sites fulfill a number of basic needs for members of contemporary society. The majority of visitors are not archaeologists, but they are people seeking a sense of place outside the ordinary context of the urban world.” 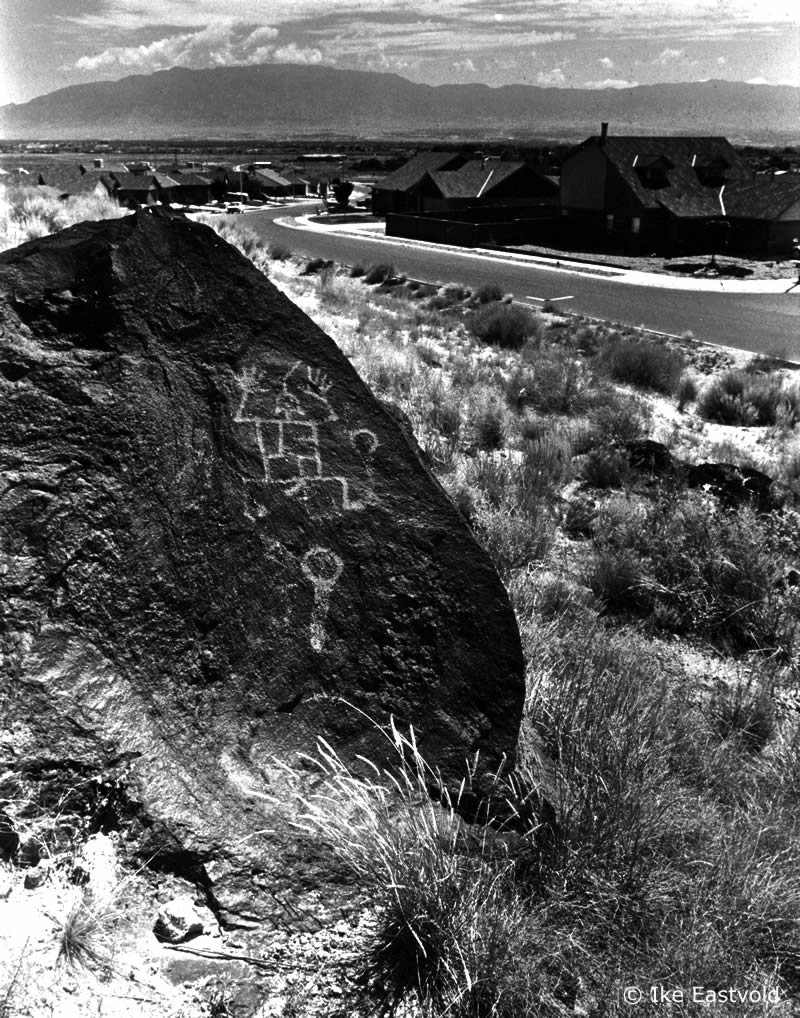 Pueblo leaders have spoken with Albuquerque area leaders regarding the freeway proposal. “This is one of the last remaining sacred sites for Pueblo people. In the name of the ‘public good,’ or in the ‘interest of the great majority,’ or because ‘it will cost less,’ the Indian people have had their religious sites destroyed.” In addition to the impact the road would have on their religion, Pueblo Indians also know the economic value of the petroglyphs for heritage tourism. “Cities throughout the United States are constantly spending great amounts of money to capture and/or rebuild ancient or historical places within their cities. Why can’t Albuquerque join other cities with a preservation mentality and recognize that the petroglyphs are ancient and the art found in these settings is priceless, one of a kind, never to be duplicated?”

Although alternatives to the freeway have been proposed by the National Park Service, Pueblo Indians, the Sierra Club, and the Friends of the Albuquerque Petroglyphs, politicians are poised to pursue the road’s development. It is expected that following November’s elections, congressional legislation may be introduced to authorize the construction of Paseo del Norte through Petroglyph National Monument. Constructing a major roadway through a National Monument sets an ominous precedent for future development in other National Monuments and parks. In the case of Petroglyph National Monument the road will not only spoil an open-space at the edge of urban sprawl, it will devastate Pueblo Indian culture, which has already lost too many sacred sites to development projects. 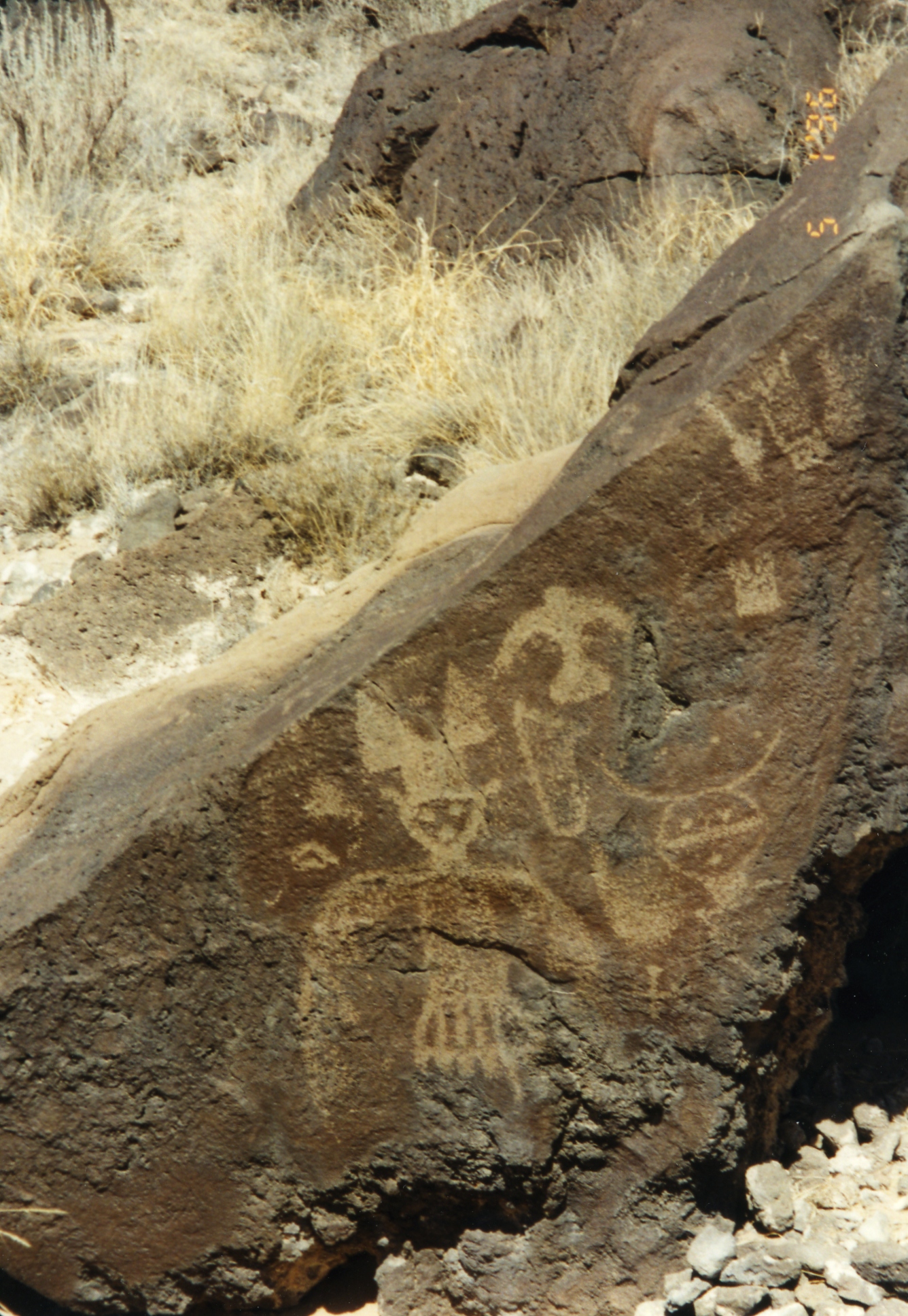 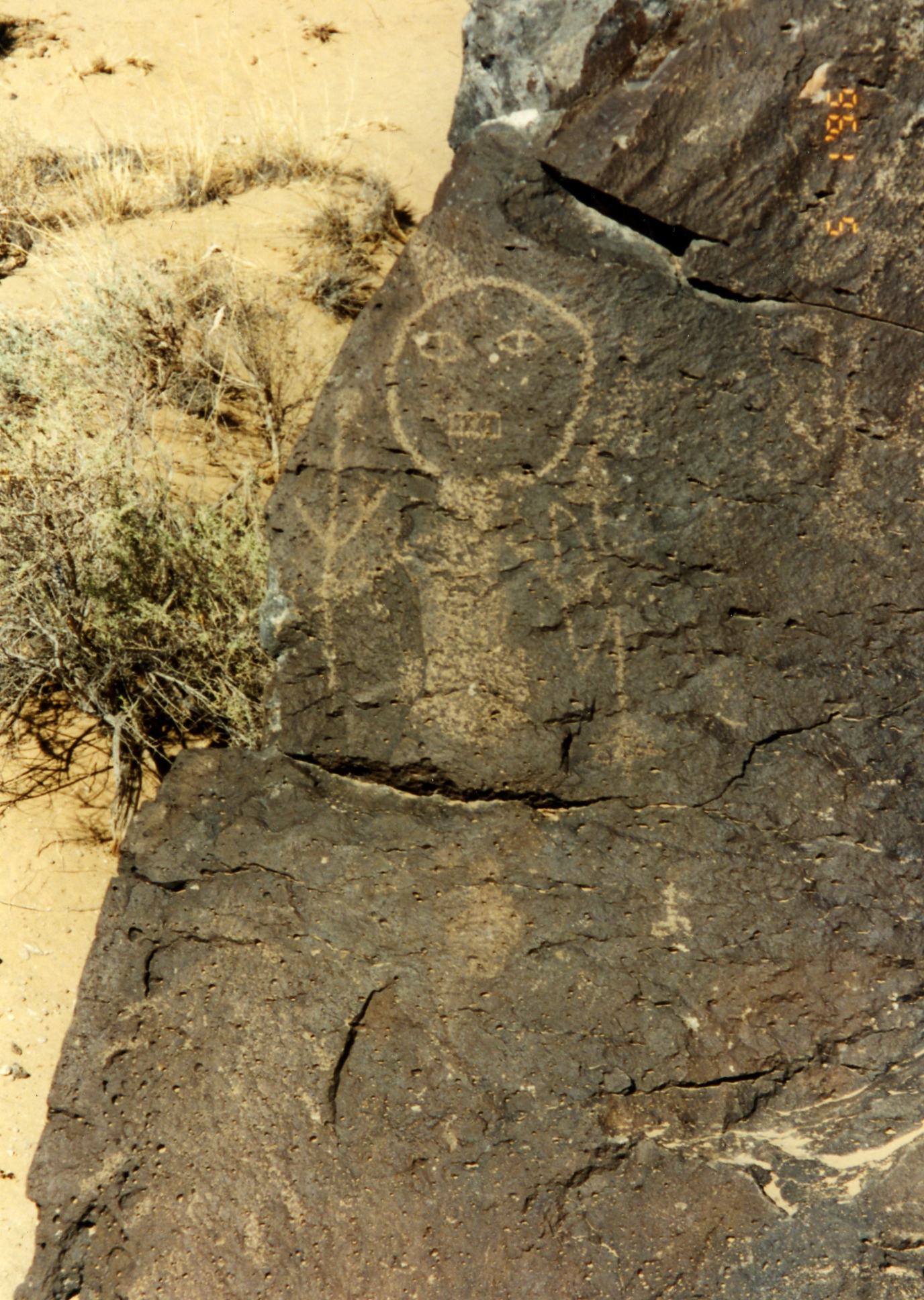 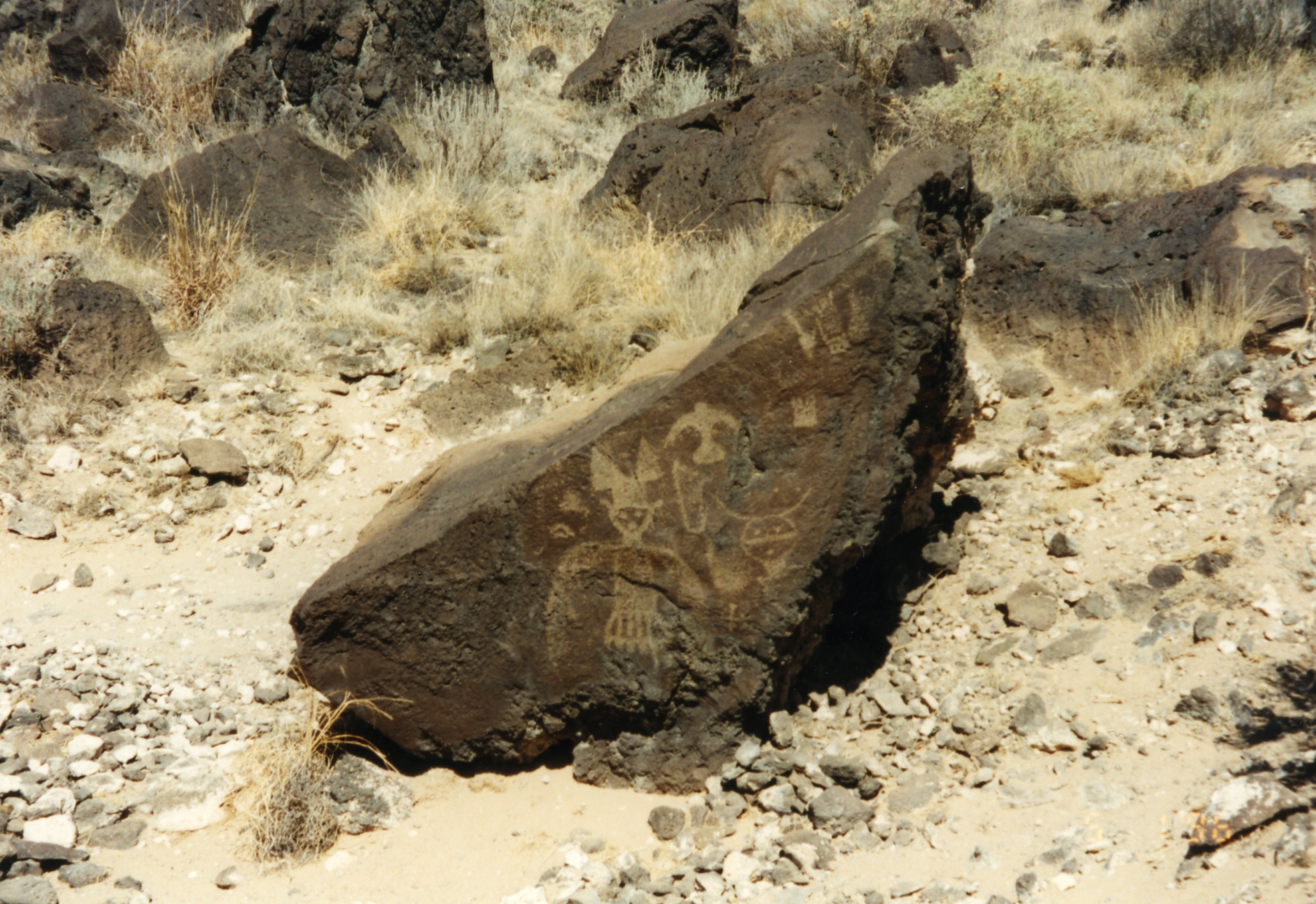