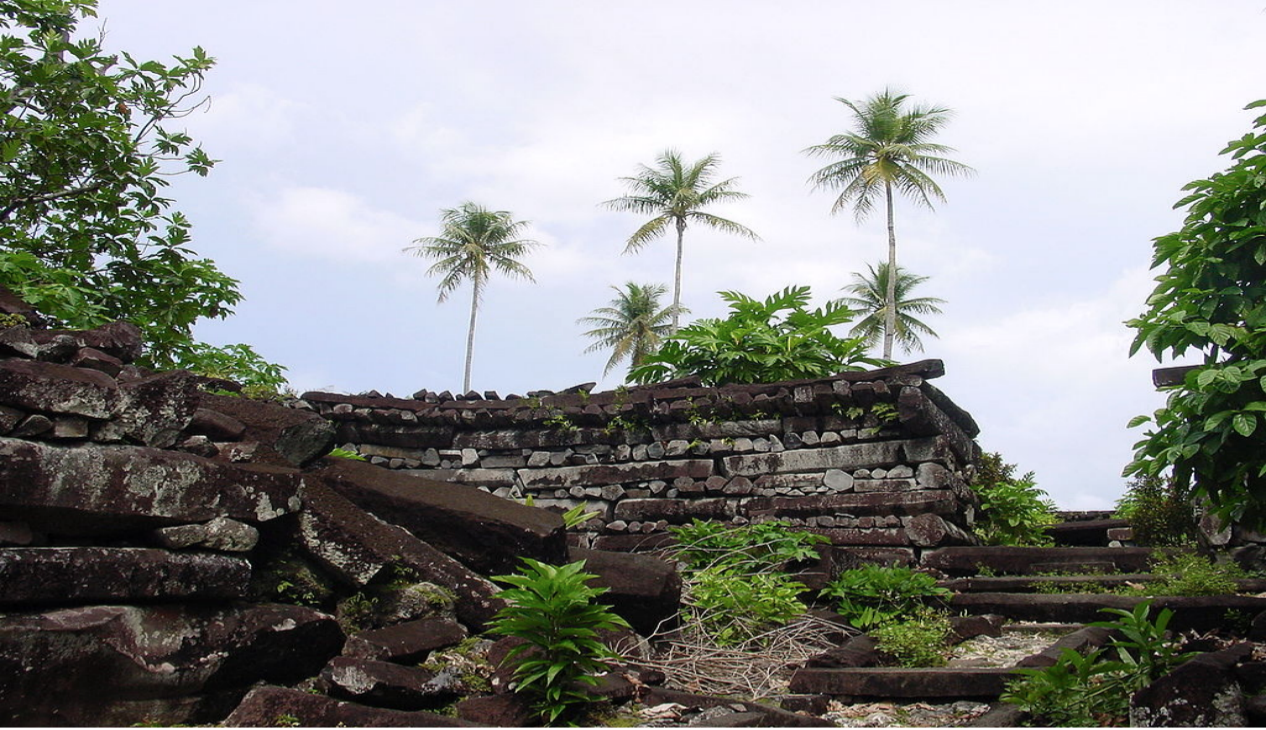 Nan Madol rises dramatically and unexpectedly out of the Pacific Ocean. This majestic ancient city filled with sacred centers is located off the island of Pohnpei in the U.S. Micronesia. It is the largest archaeological site in the Pacific region. Nan Madol is comprised of an intricate system of waterways that crisscross 92 human constructed islets and structures. The black stone buildings are completely unique in their construction. There is no other architecture of this kind known in the world. The building of Nan Madol was an impressive engineering feat that withstood strong waves and ocean currents. The city’s construction also required divine assistance and spiritual intent when heavy megalithic stones were moved into place. Now, after standing for over 1500 years, the survival of this sacred city is threatened by deterioration.

The site was constructed on an area called, “The Reef of Heaven.” The building took place over a period of one thousand years, between 500 and 1500 A.D. Many of the islets are dominated by megalithic structures comprised of long, naturally prismatic, log-like basalt stones. Some of these rocks weigh 50 to 60 tons. Evidence suggests that some of the islets played an important roles in the religion of a thriving Pacific Ocean culture. Upper Madol, “Madol Powe,” was the priests’ town and Lower Madol, “Madol Pah,” was occupied by high-ranking rulers. Both sections included important sacred sites.

According to Pohnpeian oral history, initial construction of Nan Madol was begun by two brothers, Ohlosohpa and Olosihpa.

These holy men sailed from a land in the west searching for a place to build a sacred center where they could worship a presence called the “honored spirit of the land.” After several attempts they found a suitable location. With the assistance of gods and their companions, they first erected a rock on the reef to serve as a transit for laying the islets’ foundations. Strong waves made building nearly impossible. Finally an important man arrived on a magical rock to assist with the project. He cast a spell and the rock turned into an outer foundation wall that protected the islet structures from ocean forces. This wall has the only gate providing entrance to Nan Madol from the ocean. It is believed that this gate leads to an honored underground city, Kahnimweiso.

Just beyond the entry gate stands the most impressive of the site’s structures. The islet is called Nan Douwas, which means “in the mouth of the high chief.” It was a place to pray to “the honored spirit of the land,” as well as a refuge and meeting place for tribal chiefs. This islet consists of an immense double-walled stone burial vault that housed the remains of ancient rulers. Its impressive construction contains 13,500 cubic meters of coral fill, 4,500 cubic meters of basalt and has twenty-five-foot high walls. Because of its spectacular appearance, Nan Douwas is the most frequently visited islet.

The main religious center of Nan Madol was the islet of Idehd. Every year, at a time determined by divination and change in the agricultural seasons, the high priests performed extended rituals of homage, supplication and atonement. The rituals ended with the offering of a turtle to the great saltwater eel that acted as a medium between the people and the ruler’s god. The eel’s acceptance of the turtle indicated that, “the honored spirit of the land,” was pleased with human conduct on Pohnpei.

Other islets had important sacred ceremonial sites. Darong was symmetrically constructed around a natural reef pool. Eleven tunnel-like channels ran through the coral fill. These were constructed with carefully cut coral bricks set between rows of basalt columns. It is believe that these channels were used to keep sacred eels, Legends indicate that the pool was also used for seasonal ritualistic clam fishing. A remarkable two-ton pounding stone found on this islet suggests a ceremonial structure of priest’s house.

The islet of Peikapw had two sacred pools. One probably held the turtles used on Idehd. The other was a magical pool where rulers could see all events taking place on neigh boring islands. IN addition, there are two sacred trees and stones said to have once been women who neglected a famous giant god.

Kohnderek was the most important islet for burial rituals. When a person dies their body was perfumed with coconut oil and wrapped in a mat along with flowers, fish bones, and some of their belongings. They were taken to visit all the islets, finally stopping at Kohnderek. The most important funeral dancing and drinking occurred on this islet before the burial on one of the other islets.

As the end of the 20th century grows closer, Nan Madol is in danger of destruction from the ravaged of tie and from increased tourism. Immediate preservation needs are the stabilization of the islets’ retaining walls and the walls of the structures, vegetation removal and maintenance and proper management of eco-tourism.

The protection and preservation of Nan Madol was provided for in 2986 in its proclamation as a U.S. National Historic Landmark. The site is being nominated to the World Heritage List of the World Heritage Committee of UNESCO because of its “outstanding universal value from the historical, aesthetic and anthropological points of view.” (See Site Saver, Vol. II, No. 3 on UNESCO World Heritage Sites.)

The state of Pohnpei is passing its own preservation legislation, which will further protect the site’s integrity and aesthetic qualities.

The importance of the site has also attracted a group of private individuals who have formed the Nan Madol Foundation. This non-profit group is dedicated to researching, preserving, and protecting the area. They are developing a master plan for education and economic development.

Tourists are increasing at this unique site. Their numbers are expected to increase exponentially when the National Geographic Society releases its new book Mysteries of Mankind  later this year. Approximately 600,000 copies will be produced, featuring such sacred sites as the Pyramids, Stonehenge, Easter Island, and Nan Madol.

In anticipation of more visitors, the Nan Madol Foundation is working to preserve the site and its culture by building small family-owned traditional-style hotels. They envision a strong educational component for visitors, which will emphasize traditional island arts, crafts, dances, and story telling. By such forward thinking it is hoped that this site can be preserved for future generations before overdevelopment and overuse destroy its integrity.

Carol Nervig is a former Peace Corps volunteer who served on the island of Pohnpei. Sacred Sites International first published this story in 1992. It took over 25 years for Nan Madol to become a UNESCO World Heritage Site.