Site Saver Newsletter is a benefit of membership to Sacred Sites International Foundation. To receive a sample news letter please send a $3.50 donation to:

Natural water reservoirs of the Earth have always attracted people displaying nature’s harmony. Our planet has many lakes considered to be its splendid embellishment. Baikal lake is a unique pearl from that necklace. Holy Sea, Sacred Lake, and Spiritual Waters are names that have been given to Baikal by its ancient native dwellers, by Russians who came to Baikal’s coast in the seventeenth century, and by foreign travelers who worshipped its magnificence and mystical beauty. 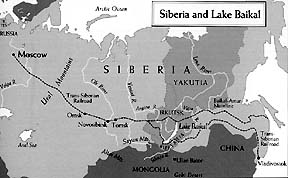 The grandeur of the lake is revealed even in its statistics: 636 km. (nearly 400 miles) in length and up to 79 km. in width, it is the fifth largest lake in the world in terms of area. It can not be compared with anything and nothing can be compared with it. Everything here on Baikal makes a deep impression on our imagination and boggles the mind. Its age is 20 million years, its crystal mirror-like surface extends to 31,171 sq. km., its maximum depth reaches 1637 meters (1.2 miles), making it the deepest lake in the world. So vast is the lake that it was referred to as “an inland sea -‘Ye glorious sea, ye sacred Baikal’ goes an old Siberian folksong…” Baikal is so transparent that a white disk can be seen down to a depth of 40 meters. In Spring the lake is so strikingly blue that no one can divert their eyes from it.

Lake Baikal has always astonished travelers with its natural wildness. One of the early naturalists, Gustav Rhodes, made complaints about bears which prevented him from reaching the deep forest and caused him to refuse climbing the rocky peaks of Svyatoy Nos, the so-called Holy Nose peninsula. This prominent landmark juts dramatically out into the lake like a crooked beak and natives have long considered Holy Nose to be sacred. The well-known writer, Anton Checkhov, saw the “glorious sea” in the following way while traveling in 1890, “Baikal is surprising and it is not without reason that Siberians call it stately, not a lake but a sea. Water is extraordinarily transparent and one can see through it like the air, the color is tender turquoise, pleasant to the eye. The shores are rocklike, covered with a forest; everywhere wilderness is impenetrable and pitch-black. There is an abundance of bears, sables, wild goats and all sorts of wild creatures.”

While reading the impressions of different people who have visited various parts of Baikal, one notices much in common. These impressions are united by a feeling of high admiration for the lake; every site has itself a distinctive and special charm. In fact, long-time residents can look at the stones in the hand of a newcomer and immediately determine from what part of the lake that person came from – Chevirkuyskiu gulf, where they might enjoy mineral water baths, from Turali peninsula where they might listen to singing sands or from Aiya, a very beautiful inlet in northern Baikal.

Some places on the lake are regarded as not only beautiful but also as sacred. The Buryats, one of the region’s indigenous tribes, have numerous legends about spirits and sacred sites along Baikal. A folk-story tells about the origins of a large stone known as the Shaman Rock. Lake Baikal is described as the father of 330 daughters who were mountain streams. All but one daughter was happy to be near the father. The unsettled daughter-stream, Angara, wanted to follow a big warrior-river in the West. Angara broke free while her father, Lake Baikal, slept. In the process she was very noisy and woke her father. Baikal, angry at Angara’s departure, threw a large rock trying to stop her. His actions were in vain, the rock remained where it landed, and it can still be seen there today. This rock was considered sacred by the Buryats and was called Holy Rock or the Shaman Rock. Buryats also used the rock as a place of judgment. Criminals were brought to the spot and left overnight outside in the cold. Those who survived the night were forgiven and allowed to go free.

Sacred sites, in addition to those bearing holy names, are numerous on Lake Baikal. The regions’ indigenous people still go to natural sacred places, such as rocks and trees, revered by their ancestors. These shrines are kept alive with monthly offerings placed near the shrines.

Mid-way on the northern shore of Baikal is an area considered to be the most sacred. It is here, about eight miles from the north shore that we find Olkhon, named by the Buryats for the forests which cover the island. Olkhon is the biggest island on Baikal extending more than 70 km. (60 miles) in length and up to 20 km. (15 miles) in width. Its terrain is varied with sweeping prairies, steep rocks, dry valleys overgrown with berry bushes and small, shallow bays with sandy beaches and warm water. The island’s steep sides cut into the aquamarine sea-lake and its capes are like characters out of ancient Siberian folk-tales guarding the island’s peace. The most beautiful of these capes, Burchan, bears the name of the Buryats’ primary god. The bank closest to Burchan has a cave which cuts through the rock. The entrance is on the eastern side and the exit on the western one. Native people considered the cave a sacred place, a dwelling of shamans. The cave is, however, now inscribed with Buddhist prayers, remnants of seventeenth century arrival of Tibetan Lamaist Buddhism. The new religion partly absorbed the native shamanistic traditions and partially replaced them. The first words of one prayer read, “Ou, Burchan, Tingiri!”, invoking the Buryat-Lamaist’s god and heaven.

Baikal lake has numerous sacred sites and monuments. The challenge for today is preserving this time honored sacred place, one of the world’s most unique regions. In the words of one Buryat, “In ancient times all life was considered sacred. Now those times are gone, nobody thinks about it any more.” Now the authors of this article join with other concerned people around the world in bringing attention to the great northern sacred sea.

M. D. Ananicheva and Y. M. Knonov are based at Moscow’s Institute of Geography. They are also a part of The Center for Scientific and Ecological Tourism.