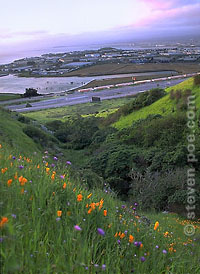 To Patrick Orozco of the Pajaro Valley Ohlone Indian Council of Watsonville, California, San Bruno Mountain is sacred ground. His ancestral villages are on the mountain and he still feels the presence of the ancient ones. Several shellmounds remain from what were once six mounds. Over 5,000 years ago, Ohlone Indians created huge mounds out of discarded shells from the shellfish they ate, dirt and soil. They lived upon the mounds, held ceremonies, and buried their people on the southeastern side of San Bruno Mountain facing the bay. Visitors to the site can still see the small pieces of shells glistening in the soil where the mounds have been measured at six feet in depth.

That anything remains of this site is something of a miracle in the heavily developed San Francisco Bay Area. Below the shellmound site cars speed along the freeway en route to the airport and on the southern side is a sprawling housing development. Open land can be rare and private developers have had their plans drawn up for the shellmound site for many years.

San Bruno Mountain Watch (SBMW), a non-profit group founded by David Schooley, has had success in preserving some of the montain as parkland, after more than thirty years of struggle. This environmental group has been instrumental in bringing attention to the numerous rare and endangered species found on this last wild remnant of the Franciscan bioregion. Some species like the San Francisco silverspot butterfly exist only on San Bruno Mountain. The group has also sought to protect the shellmound, recognizing its importance as a cultural resource.

SunChase of Arizona was one of a chain of developers who had plans to build on the mountain. They took over development plans when an earlier developer went bankrupt. Their plans were for a Three Phased building program called the Terra Bay Project. Phases One and Two consisted of houses and townhouses that have been built on the southern side of the mountain.

Phase Three of the Terra Bay Project was even more ambitious than the earlier phases. It included hotels and offices that would directly encroach on the sacred shellmound site which is about 26 acres near the base of the mountain.

The developer SunChase kept an archaeological report secret for years before it was leaked to San Bruno Mountain Watch in 1992. That report uncovered the cultural importance of the shellmound site by cataloguing artifacts such as cooking and hunting tools that had been found. But, the real revelation of the report was the vast number of burials that remained at the site. This report gave credence to what many had believed for years: the site is sacred.

After years of lobbying by local groups against the development, a lawsuit ensued from Patrick Orozco, and environmental groups including San Bruno Mountain Watch. This resulted in an out-of-court settlement that removed the shellmound from the development plans of Myers Development, the latest owner.

The ground had been laid for this settlement by several other lawsuits. A 1999 lawsuit brought by San Bruno Mountain Watch against South San Francisco was over the city’s approval of the environmental impact report for the mountain. Another lawsuit was at the federal level when the Center for Biological Diversity joined SBMW in suing the U.S. Army Corps of Engineers for issuing a permit to dump landfill on wetlands. These suits held up development until the year 2000 when they were dismissed. Myers development was allowed to proceed with their development plans with the agreement that they would establish a five-acre buffer zone between the shellmound and the offices which they are building.

The sacred site is in the process of being purchased by the Trust for Public Land with plans to add it to the San Bruno Mountain State and County Park, thereby guaranteeing it protection from development. Patrick Orozco is now assured that he and other Ohlone descendents can experience the sacredness of the site by knowing that their ancestors final resting places will not be disturbed.