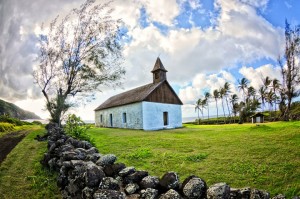 Location: Kaupo district, the leeward side of the island of Maui, Hawaii, at a place called Mokulau

Who Considers it Sacred? The residents of the East Maui village of Kaupo and town of Hana, along with visitors from throughout the world

The Site was Saved from: Disrepair due to age and weathering

Cultural and Sacred History: The church was built in 1859 by Congregational missionaries with the labor of Native Hawaiians. By the 20th century, the congregation had dwindled and guest preachers from the Congregational, Episcopalian and Baptist traditions performed services once a month.

When the Kaupo Ranch opened in 1929, the ranch employees and paniolos, Hawaiian cowboys, attended the church and the ranch looked after the church. The Ranch manager from 1967 to 1982, Carl “Soot” Bredhoff organized a renovation of Huialoha in 1978. He teamed up with his friend, Carl “Linky” Lindquist to raise money for the restoration.

By the 21st century, the church had again fallen into disrepair and “Linky” Lindquist and “Soot” Bredhooff again coordinated the renovation efforts. Their efforts were delayed for a year when a bridge over the only road into the area washed out. Tragically, before work could begin, Lindquist was swept out to sea in a flash flood that occurred on Thanksgiving of 2011.

The Preservation Solution: A visiting French-Canadian, Stephan Lefebvre, had come to Kaupo Ranch on a vacation to ride with the paniolos. During his vacation, the cowboys told him about the church needing repairs to its floor. When he learned of the tragedy that had befallen Lindquist, he abandoned his vacation and teamed up with Jason Kidd, the minister of Wananalua Church in Hana, for what he thought might be a weekend job with enough volunteers. The call went out and they were expecting maybe twenty-five people – fifty showed up. It was soon determined that one weekend would not be enough and the church floor was stripped to its foundation and the rotted pine floor was replaced with hardwood. “Soot” Bredhoff and Charles “Uncle Chunga” Kahaleauki Jr. had been involved in the 1978 restoration and they guided this one, too. Stephan Lefebvre abandoned his plans to return to Canada until the work was done.

Repairs are continuing and the roof will be replaced in a few weeks. The floor needs additional finishing, and the windows and doors need replacing. Fundraising continues for these efforts.

Donations can be made at http://www.huialohachurchkaupo.org