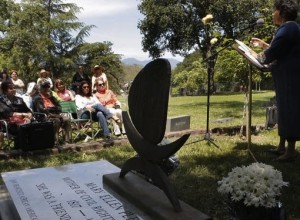 Who Considers it Sacred? The African American community of the San Francisco Bay Area considers this a sacred site for a forerunner of civil rights leaders like Martin Luther King.

The Site was Saved From: Neglect, vandalism and lack of attention to her story.

The Preservation Solution: Susheel Bibbs, a former Cal Lecturer, did extensive research on the life of Mary Ellen Pleasant and published a book, Heritage of Power, later working on a PBS film, Meet Mary Pleasant. Bibbs, with aid from the Napa Valley Museum and Tulocay Cemetery, raised money to install a new granite plaque at her burial site. A memorial ceremony included the above named supporters along with The National Parks Service.

Historical Background: Mary Ellen Pleasant was born a slave near Augusta, Georgia, between 1814 and 1817, to a Haitian Voodoo Priestess and a Virginia governor’s son, John H. Pleasants. She came to San Francisco in 1852 during the Gold Rush to escape the Fugitive Slave Law of 1852 that could have put her in jail for her work in the Underground Railway. Pleasant had been involved in rescuing escaped slaves in the Eastern United States. In San Francisco, she worked a variety of jobs and owned a number of businesses. She amassed wealth that she used to employ, sponsor and help African Americans in business. She also helped ex-slaves by hiring lawyers to defend them against unfair laws. From 1863-68 she successfully orchestrated lawsuits and court cases to fight against laws that prevented blacks from riding San Francisco’s trolleys. One of them, Pleasants vs. North Beach and Mission Railroad, was used in 1982 to change modern civil-rights law. At one time, she owned a 30-room mansion in San Francisco on the corner of Octavia and Bush that is marked by a memorial plaque.