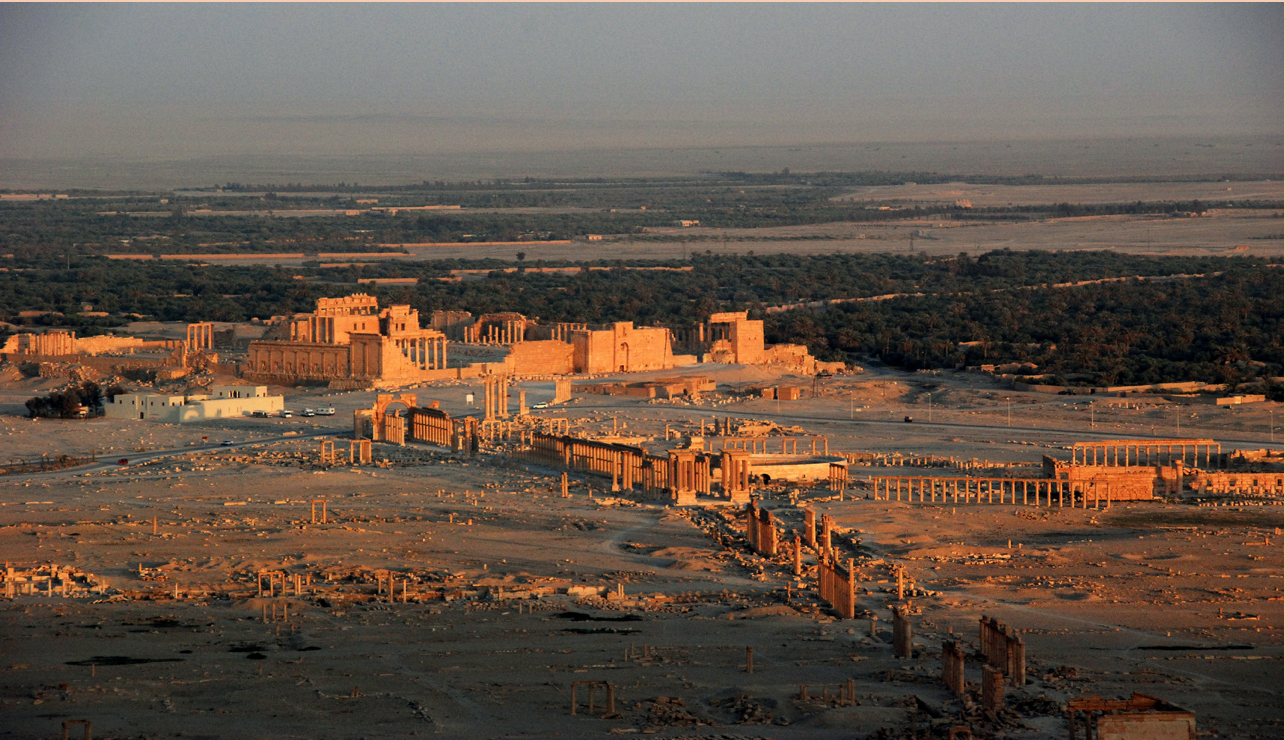 Palmyra, located north-east of Damascus, in the Syrian Desert, was a caravan oasis on a trade route that linked the Mediterranean world with lands to the south and east such as India and China. In that sense, Palmyra was the crossroads of different ancient civilizations and cultures.

The site of Palmyra has been recognized as a UNESCO World Heritage Site since 1980 and was also designated a national monument by Syria for its cultural and historical value. Thus, Palmyra has been receiving worldwide attention because it contains numerous important ancient ruins, which are now endangered due to numerous rounds of military presence and destruction by ISIL (Islamic State of Iraq and the Levant).

Palmyra, also known as its pre-Semitic name Tadmor, is firstly mentioned in the Mari tablets in the 2nd millennium BC. Palmyra became prosperous as an oasis on the caravan trade routes that linked the Persian Gulf and the Eurasian continent to the Far East, India and China. Profiting from its strategic location, Palmyra remained autonomous for over half a century, primarily populated by Aramaeans and Arabs. When it came under Roman control in the mid-first century AD, Palmyra was incorporated into the Roman province of Syria during the reign of Roman emperor Tiberius (14-37 A.D).

Palmyra lost its influence over the trade routes due to the foundation of the Sasanian Empire of Iran in 224 A.D. Odaenathus, had been appointed by governor by Valerian, (253-260 A.D.) He drove the Sassanian’s out of Syria. After his assassination, his second wife, Zenobia ruled the city and expanded the border to Egypt and much of Asia Minor, or Anatolia. Although the city declared its independence from Rome under the rule of Zenobia, the Roman emperor Aurelian reconquered Palmyra in 272 A.D.

In 634, Palmyra was conquered by the Muslim general Khalid Ibnal-Walid in the name of the first Muslim caliph, Abu Bakr. Afterwards, it had been ruled as part of Muslim caliphates until it became part of the Ottoman Empire in 1516.9 In 1678, the ancient ruins of Palmyra were rediscovered by English travelers.

The artistic & architectural significance of Palmyra

The site of Palmyra bears witness to the mixture of these ancient cultures. Nasser Rabbat, a Syrian art historian, explained that the Palmyrene culture was “Arab in origin, but then classical in influence and in temperament and inclination” and thus, Palmyra is “a mark of how cultures can come together creatively”. Art found on a number of public monuments including the Temple of Ba’al, Diocletian’s Camp, the Agora, Theatre, and other temples exhibits the Greco-Roman art integrated with local traditions and Persian influences.

Specifically, architectural ornaments including distinctive funerary reliefs demonstrate that Palmyra produced a unique artistic style based on its multicultural landscape. While the funerary monuments contain Aramaic inscriptions, they “provide some of the best evidence of jewelry in the Greco-Roman world.“ According to Maura Heyn, an Associate Professor of Classical Studies at the University of North Carolina, monuments “provide us with an abundance of evidence for cultural change and negotiation.”

This Palmyrene artistic style placed its emphasis on the delicate details of clothing of deities and the frontal representation of the person depicted, and is considered a forerunner of Byzantine art.

The design of the temples is also distinctive, although the basic style is closely related to Greek temples; the roofs are decorated with stone triangles known as merlons, of which the edges look like rows of pointy teeth. The grand colonnade that stands along a street of 1100 meters’ in length also represents a major artistic development. The discovery of the ruins of Palmyra by Western travelers in the 17th and 18th century greatly influenced subsequent architectural styles and urban design in the West.

Palmyra as a Sacred Place

The temples were dedicated to multiple deities, and as Nasser Rabbat explained, “Inside you have to turn either right or left because the temple had two altars.”

Among those temples, the temple of Ba’al was dedicated to the Mesopotamian god Bel, or Ba’al. The temple is considered “one of the most important religious buildings of the 1st century AD in the East and of unique design.” The temple is a symbol of religious tolerance since the temple, originally dedicated to local deities and Mesopotamian and Arab gods, later became a Christian church during the Byzantine era and then was used as a mosque until 1920s after the Muslim conquest.

Stuart W. Manning, chairman of the Department of Classics at Cornell University, said the temple of Ba’al was “a tolerant home to different faiths and ethnic groups where Greco-Roman and local cultures merged.”

While, its religious and cultural value is recognized by all humankind in the world, Palmyra is a source of national pride for Syrians. Salam Al Kuntar, a Syrian archaeologist and visiting scholar at the University of Pennsylvania, explained, “Syrians consider Palmyra so special, because it’s a source of pride for them. They feel very faithful to this past history and the monuments and art that signify it.” Rabbat, recalling his childhood memory of listening stories about Palmyra, also said, “This is the meaning of heritage – it’s not only architecture or artifacts that are representing history, it’s these memories and ancestral connection to the place.”

Threats due to Syrian Civil War and Destruction by ISIL

Palmyra, was declared a UNESCO World Heritage Site in 1980, because it was a significant cultural site of incalculable value. It has been gravely threatened due to the Syrian Civil War that erupted in 2012 and the following destruction by ISIL (Islamic State of Iraq and the Levant).

As the violence spread across the Syria in 2012, the Syrian Army set up its military camp in Palmyra; a resident who escaped, described the chaos, “Palmyra is surrounded by the army from all fronts. Machine gun fire rains down from the citadel at anything that moves in the ruins because they think it is rebels.”

In the face of devastation from warring factions, the Director-General of UNESCO, Irina Bokova, repeatedly expressed her grave concern about further damage to Palmyra by saying “To date, three UNESCO World Heritage Sites – Palmyra, the Crac des Chevaliers, and Aleppo including the Aleppo Citadel – are being used for military purpose and this raises the risk of imminent and irreversible destruction, in addition to that which these sites have already suffered.” And, “Damage to the heritage of the country is damage to the soul of its people and its identity.” She also called on the Syrian authorities for fulfilling their obligation codified in the 1954 UNESCO Convention for the Protection of Cultural Properties in the Event of Armed Conflict.

In May 2015, the armed extremist group, also known as ISIL, took control of Palmyra, and in August, blew-up of the temple of Baalshamin, one of the best-preserved buildings in Palymra. According to UNESCO, “Its cella, or inner area, was severely damaged, …followed by the collapse of the surrounding columns.” UNESCO Director-General, Irina Bokova strongly condemned the successive destruction of Palmyrene ancient ruins, saying “The systematic destruction of cultural symbols embodying Syrian cultural diversity reveals the true intent of such attacks, which is to deprive the Syrian people of its knowledge, its identity and history. Daesh [ISIL] is killing people and destroying sites, but cannot silence history and will ultimately fail to erase this great culture from the memory of the world.”

Despite the international condemnation, the extremist group continued the destruction of cultural sites for three reasons, the first of which is that ISIL justifies its destruction in terms of iconoclasm. ISIL considers representative art depicted on the ancient temples as a form of idolatry based on the Muslim monotheism, the belief that there exists only one god. Therefore, pre-Islamic religious heritage, specifically the temples dedicated to multiple deities at Palmyra, is regarded as blasphemous for the group. Another reason behind the destruction is publicity. Destroying the culturally significant temples is the easiest way to attract media attention for ISIL, allowing the group to propagate its message all over the world. In this respect, Erin Thompson, professor of art crime at John Jay College, said, “They are using, essentially, the media to convey to potential recruits this idea that the West is powerless to defend against ISIS’ destruction of things that are so important to us.” In addition, ISIL has been looting the valuable antiquities from Palmyra, which became a source of funding for its activities, thus, meaning the group will continue the destruction of cultural sites such as Palmyra.

The efforts for preservation and protection

Prior to the capture of Palmyra by ISIL, UNESCO had been offering training courses for conservation experts from Syria and hosting meetings in order to create a team of observers to monitor and safeguard the site.

In May 2014, UNESCO held the meeting entitled ‘Rallying the International Community to Safeguard Syria’s Cultural Heritage’ in which more than 120 experts discussed the need to prevent the site from further illicit trafficking and looting of objects and to demilitarize the endangered site. At this meeting, the decision was made by the observers to assess the state of endangered cultural sites within Syria. In December 2014, UNESCO jointly organized a three-week training course for

In December 2014, UNESCO jointly organized a three-week training course for conservation experts from across Syria with the ICCROM-ATHAR, (The International Center for the Study and Restoration of Cultural Property and the Architectural and Archaeological Tangible Heritage in the Arab Region, and the ARC-WH (Arab Regional Center for World Heritage in Bahrain.) Its objective was “to secure the endangered cultural sites and take the appropriate preparatory procedures for the post-conflict recovery phase,” by improving technical skills of conservation architects, engineers and archaeologists. 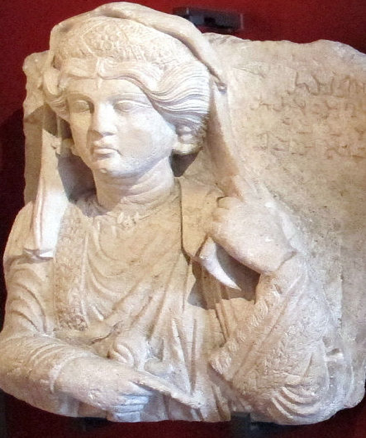 While Palmyra was under the control of ISIL, the international community condemned ISIL’s destruction of the site and UNESCO also called for cooperation of all the partners and relevant parties to ensure safeguarding of Palmyra. Some experts even sacrificed their lives to protect the endangered sites. Khaled al-As’ad, who spent more than 50 years on the task of overseeing and preserving antiquities at the site of Palmyra, was murdered by ISIL since he refused to reveal the location of valuable antiquities.

After the Syrian army, backed by Russian warplanes, retook the site of Palmyra in March 2016, experts sent by UNESCO have been in the process of assessing the state of ancient buildings damaged in the wake of the conflicts. Specific emergency safeguarding measures to be undertaken are being discussed at the 40th session of the UNESCO World Heritage Committee, held in June and July of 2016.

Now the site of Palmyra needs more worldwide attention and help than ever to rehabilitate the destroyed buildings and the glorious historical, religious, and cultural values instilled in them; the Syrian government and UNESCO need to collaborate in establishing policy to organize a team of experts who are able to conduct a systematic survey and restoration of the site. We also, need to avoid purchasing cultural artifacts of uncertain provenance in order to prevent further illicit trafficking and destruction of cultural heritage caused by ISIL.