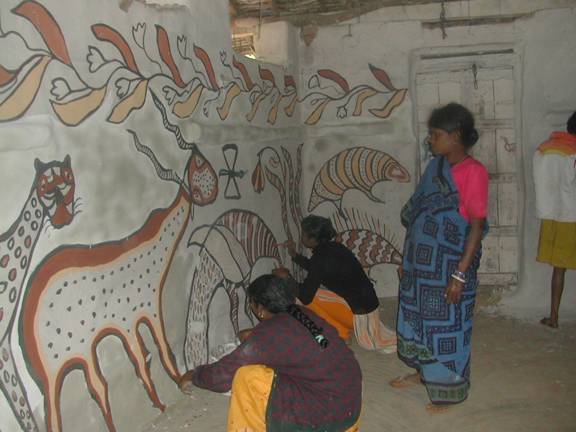 The Hazaribagh region in the new state of Jharkhand lies in the southern part of the former Bihar state. It has evidence of a very rich Palaeolithic as well as Neolithic heritage, and over two dozen rock shelters have been brought to light in the last decade which have rich microlithic beds in association with Paleolithic and Neolithic habitation sites. The rock art of the entire region has been found to be the prototype for two spectacular traditions of house-wall mural painting in natural earth ochers by the tribal people of the regions. During the spring and summer, the marriage art of Khovar and in the winter, the harvest art of Sohrai are still practiced. The former is marked by spectacular sgraffeto comb cut designs, and the latter by painted motifs celebrating the cattle and the Ancestor beings responsible for agriculture.

A deep study of the tribal traditions of art in Hazaribagh has already been underway for the past decade and the research has led to several academic degrees being granted in this subject. Comparative studies of thfe folklore of this ancient and culturally rich region has demonstrated that it was a part of the pre-vedic cultural complex which had one of its manifestations in the Indus valley. A series a studies focusing on megaliths, folklore, and rock art, including a series of documentary films, have shown that the Hazaribagh region and its environs was part of the foundations of Indian civilizations. It is perhaps one of the oldest continuing cultural manifestations to be found in the world.

Since 1901, the river valley of the Damodar River flowing through this region has been under assault by coal mining. It has completely destroyed the lower valley of the river, its forests and prehistoric antiquities , displaced hundreds of tribal villages and raised the forest cover from a high of 65% to a present low of 0.05%. Vast coal beds were discovered by the British in the upper valley Damodar River as far back as the middle of the 19th century. After the independence of India in 1947 it became the wish of the country’s first Prime Minister, Jawaharlal Nehru, to build large dams to generate electricity all over India. The fate of the Damodar was sealed by six big dams and several thousand small dams displacing hundreds of villages and millions of tribal people only a handful of whom were re-settled.

In 1986, it came to our notice at the Indian National Trust for Art and Cultural Heritage (INTACH) that a coal expansion scheme called the North Karanpura Coal fields project ( NKCP) under the auspices of the Central Coal fields Ltd. (CCL), was going to wipe out almost entirely the upper valley of the Damodar in its upper water shed less than 30km from its source. Over 70 open-cast coal mines were planned that would destroy over two hundred tribal villages, their sacred sites, including sacred groves, and megalithic burial ground, and permanently damage the forest ecosystem, corridors, and its wildlife, including endangered species of tigers and elephants, which are found both in the ten thousand year old rock art as well as in the contemporary tribal house-wall paintings. Nearly 2000sqkm of rich forests and agricultural lands of the highest quality would be destroyed. 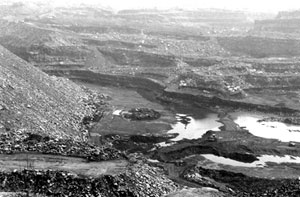 The coal expansion project envisioned big dams in the upper valley accompanied by coal fired Super Thermal Power Stations (STPP) being built at the pit-head of the coal mines, to develop a power grid comparable to that at Singrauli on the Sone river not far distant in the west, creating one of the largest at source coal-pit-head thermal power generation grids in all of Asia. Although seemingly an impossible task to prevent these measures in a power hungry developing third world country like India, INTACH appealed the Ministry of Environment and Forests and in 1989, in the Maneka Gandhi Ministry, succeeded in stopping the first in a series of STPP’s at Tandwa, in the western and of the North Karanpura valley. Meanwhile, the first mine had started operation in Piperwar and several villages and sacred groves were threatened. In due course, a second open cast mine was started in nearby Ashoka Project. Through INTACH’s intervention, delay in the environmental clearance for the next mines was successful while international investigators and activists became involved in assessing the situation. A railway and network of roads was planned, and in India a railway may be built without environmental clearance, which is a further hazard. In 1993 INTACH appealed to UNESCO to declare the region an endangered World Heritage Site giving an impressive list of over 65 Paleolithic, Mesolithic, Neolithic, Megalithic, Iron Age, and Buddhist sites including sacred groves, burial grounds, and stomping grounds. 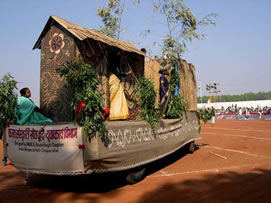 We have been fighting at all levels for the past decade including presentation of the violation of indigenous rights and human rights before the UN’s Working Group on Indigenous Population at Geneva, and demanding the Draft Declaration on the Rights of Indigenous Peoples be enforced. Several human rights group including FIAN International Human Rights Organization, Heidelberg; Centre on Housing Rights And Evictions; the Netherlands, International Working Group for Indigenous Affairs, Copenhagen; The UN High Commission For Human Rights, Geneva; and other organizations have been contacted. It would be right to say the cumulative impact of these and a specific campaign to protect endangered tiger and elephant wildlife corridors in the North Karanpura valley from the proposed coal mines led to the withdrawal recently of a World Bank Loan to the mining company.

The valley of the Damodar, especially in its upper watershed represents a site of Early man, tribal villages, priceless rock art and archaeological sites, sacred groves and one of the most important series of megalithic sites in India all of which are relevant only in situ, and are unmovable. We want the entire valley preserved and reserved exclusively for members of the diverse tribal communities that have since time in memorial inhabited this culturally and ecologically rich habitat which documents the rise of human civilization in India. In our effort we have worked with as many organizations as possible to highlight the exploitation and abuse of India’s indigenous peoples and their rights and the destruction of survival resources, food, shelter, worship, and lifestyle. The threat to their food trees such as the mohwa (madhuca latifolia) and traditional learning is almost equal to the threat of their Sacred Groves where they worship and Megalithic burial grounds.