Tourism is Kenya’s main source of foreign exchange, and the tropical paradise of the Kenya coast is almost as powerful a draw as the wildlife herds of the interior savannahs. In 1990 it was estimated that over 100,000 jobs were created directly by the tourist industry, and many more Kenyans benefit from activities related to tourism.

Yet these economic benefits are brought at great cost to the environment and culture of Kenya. Irreplaceable elements of the national heritage are being destroyed as local businessmen and politicians collaborate with foreign commercial interests to gain spectacular short-term profits from trafficking in community property. The acute need for productive farmland in a country that has one of the world’s highest population growth rates is exacerbated along the coastal strip by the demand for prime sites for tourist development. In Kwale and Kilifi Districts many of these sites happen to be small patches of indigenous forest whose sacred status has been preserved by the local Mijikenda people.

The sacred forests of the Mijikenda people are called kaya (plural Makaya). Many of them were originally fortified villages surrounded by thick belts of lowland tropical forest. Access to the village was limited to one or two paths through the forest, and use of the forest vegetation was limited to gathering of medicinal herbs. Cutting of trees for timber, grazing of livestock, and clearing for farmland were strictly prohibited. These rules were enforced by the kaya elders who were also responsible for the care of the sacred objects (fingo) which were buried in the kaya and were believed to be essential to the well-being of the community. The kaya forests were also places for prayer, not only for the elders on behalf of the community but also by individuals seeking help in problems facing their daily lives.

From the middle of the last century the reduced threat from other ethnic groups and the increase in the Mijikenda population caused people to move out from the original kaya settlements to establish new villages, but for many decades, the elders continued to live, and be buried, in the kaya forests. The Mijikenda maintained respect for the sanctity of these sites despite their increasing Islamicization, and the kaya forests survived as islands of indigenous vegetation while forests were cleared elsewhere along the coastal strip. In 1993 it was estimated that about 2000 hectares of kaya and sacred groves survived in Kwale and Kilifi Districts. More than half the known rare trees and shrubs of Kenya exist in Coast Province, many of them in the small patches of rapidly degrading kaya forest, and it is likely that a number of extinctions have already occurred.

Kenya became independent from British colonial rule in 1963, and development of the coastal strip for tourism has proceeded with increasing intensity over the last thirty years. Through tourism is not the only threat to the kaya forests, it provides a glaring example of the involvement of foreign business interests in a “property grab” that is contributing to the destruction of the indigenous vegetation and to the continued impoverishment of the local Mijikenda communities. Beginning in the mid-1980s, botanists and ecologists have become increasingly aware of the value of the kaya as repositories of rare plant species, and the threats to them. Conservation initiatives have increased, culminating in the establishment of the Coastal Forest Conservation Unit (CFCU) of the National Museums of Kenya in 1992. CFCU has offices in Kwale and Kilifi Districts and is attempting a multifaceted approach to kaya conservation. Establishing and enforcing a suitable legal status for the kaya forests are key parts of its activities, which it is hoped will serve to deflect the thrust of development onto other areas.

Sacred Land “Up for Grabs”

Over the last forty years, much of Kenya’s land has changed from communal land tenure systems to a Western system based on individual freehold tenure. Coast Province has been late in the adjudication process under which private plots are demarcated and individual title issued, rendering many areas “up for grabs” by unscrupulous individuals. CFCU is attempting to ensure protection for the kaya forests by having them gazetted (i.e. given legal status by the Government of Kenya) as national monuments under the Ancient Monuments and Antiquities Act. CFCU has also erected metal signs announcing the legal status of those kaya forests that have been gazetted, in the hope that this will act as a check on illegal use. In recent months, however, a few of these signs have been removed or destroyed. This is punishable by law, though the penalties at present are very mild, and CFCU has recently employed a legal expert to review the Act with a view of making it more effective. CFCU is also engaged in an education and public awareness program to strengthen knowledge of the kaya forests among young Mijikenda in local primary and secondary schools, many of whom are largely ignorant of their cultural heritage. Mapping of the kaya forests and the preparation of biological inventories are also part of CFCU’s ongoing activities.

In August 1995, I visited the CFCU office at Ukunda in Kwale District and spent two days in the field with two of the project personnel. Overall, I gained the impression that belief in the kaya forests is still strong and that CFCU personnel and local elders are making strenuous attempts to resist powerful trends towards private ownership and habitat destruction.

One of the most glaring examples of this habitat destruction is at Chale Island, a 22-hectare island of coral rock a few hundred meters from the mainland. It is sacred to the Digo people (one of the nine Mijikenda groups), who bring prayer offerings and put them in recesses in the coral cliffs that surround the island. Tourist development of the island began in the mid-1980s and intensified in 1991 when six hectares were allocated to several Kenyan politicians, who then sold the land to a German developer, Joe Brunlehner, for a reported 15 million Kenya shillings (about US$500,000 at 1991 exchange rates). This was done without the knowledge or consent of the local community, and at a time when plans for gazetting the whole of Chale Island as a national monument had already been drawn up. Initial development consisted of the construction of a large thatched structure for a bar and dining room, and 25 tents under smaller thatched roofs. Areas of natural vegetation were cleared and about 200 palm trees were planted. Development has not stopped there; in August 1995 I observed the ongoing construction of more permanent structures including a stone cottage and a swimming pool. Other structures on the island include a generator shed and several dormitory blocks for the hotel employees. Some of these structures extend across the boundaries of the German’s plot onto the land still owned by the local community. Uniformed security men on the mainland and on the island control all access even to the area not owned by the German. By August 1996 it was reported that visitors to the hotel were being taken for “nature walks” into the kaya, without any consultation with the kaya elders, or of course any compensation to the local community. Damage to the natural vegetation is also ongoing, as exotic trees have been planted around the new building site. The development of Chale Island has thus resulted in environmental degradation, as well as the desecration of a Mijikenda sacred site. The sign says ”Welcome – Bienvenuti – Wilkommen to Chale Paradise Island” – but a paradise for whom?

In July 1994 four hotel employees stole 17 indigenous cycad plants from Kaya Kinondo. The cycads were to be replanted in the hotel grounds. CFCU personnel discovered the theft in progress and legal action was taken against the men. When the case came up for mention at Kwale Magistrate’s Court, the CFCU Project Progress reports states that “the magistrate dismissed it on the grounds that he could not relate to a forest being a national monument” The Ancient Monuments Act protects the kaya forests in theory but in practice it is weakened by a lack of understanding on the part of officials responsible for administering justice.

Tourist development has also been particularly destructive at Kaya Diani, a mainland site that once covered about 20 hectares of rare coral rag forest. The Diani area has been intensively developed for tourists; by the 1980s the area of the kaya had been drastically reduced by the demarcation of commercial and residential plots. Although the kaya was gazetted as a national monument in 1992, and National Museum signboards were on several trees on the edge of the kaya, on my first visit to Diani in August 1995 I observed a stone house and a barbed wire fence within the kaya boundaries. In November 1995 the Kaya elders protested to the Kenya government, urging it to revoke the allocation of title deeds for the area covered by the kaya. They also resolved to fence off the 20-hectare site. On my second visit in August 1996, I learned that the plot bearing the stone house had gone through several quick sales, eventually to a German woman for 1.7 Kenyan shillings (about US$31,000 at 1995 exchange rates). She had the house demolished, preparatory to starting her won construction, before being informed that the plot lies within a gazetted National Monument and she was breaking Kenyan law. The survey and demarcation of the kaya boundaries has been completed and in early August 1996 the elders were working on the fencing, with the moral and practical support of CFCU. Despite the elders’ initiative and determination, within a few years Kaya Diani may be tourist villas, shopping centers and gold clubs. Its formerly sacred nature may remain preserved only in the memory of a few old men.

Other kaya have not reached the extreme of the destruction exemplified by Kaya Kiani, but the forces moving in this direction are powerful. At Kaya Timbwa the issue concerns the attempts of Joe Bruynlehner, the developer of Chale Island, the acquire a plot in the kaya that he identified as a source of fresh water. His employees cleared a path into the kaya, preparatory to drilling a borehole, but in December 1995 they were chased away by the kaya elders. Mr. Brunlehner then quickly acquired legal title to two other plots, one outside the kaya and one that had formerly been kaya land, and sunk two boreholes. His pipeline now runs through a trench dug across the coral reef to Chale Island. Though the local elders succeeded in denying him access to one plot in Kaya Timbwa, his interest in this area remains alive, and other developers are not far behind him. There are still considerable areas of undeveloped land along the Kenya coast. However, the kaya forests being community property, are at particular risk from both Kenyan and foreign land grabbers. Until they can be rigorously protected, the kayas’ sacred prayer sites, silence and green shade under the tall trees and climbing vines are at risk, as are all the indigenous forests of coastal Kenya. 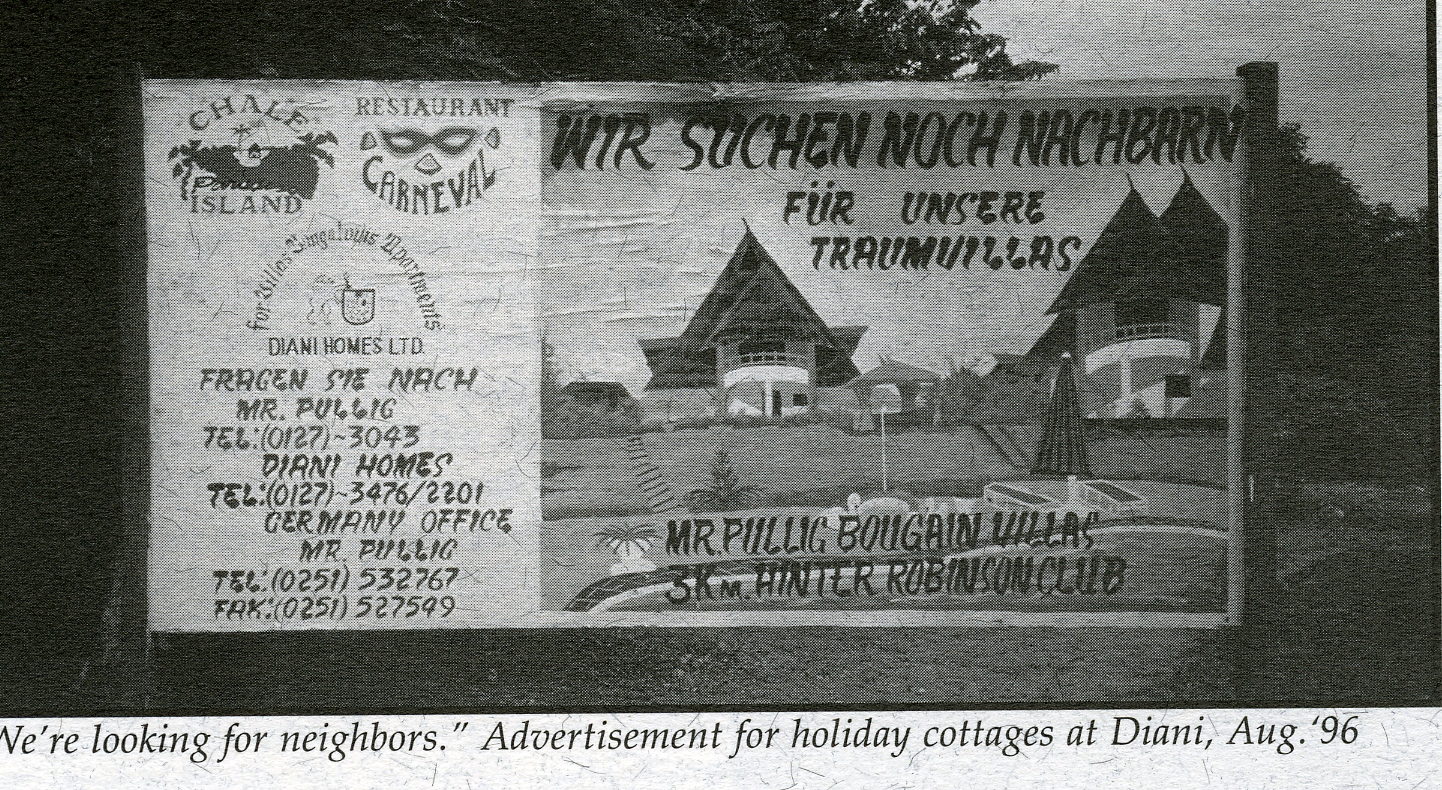 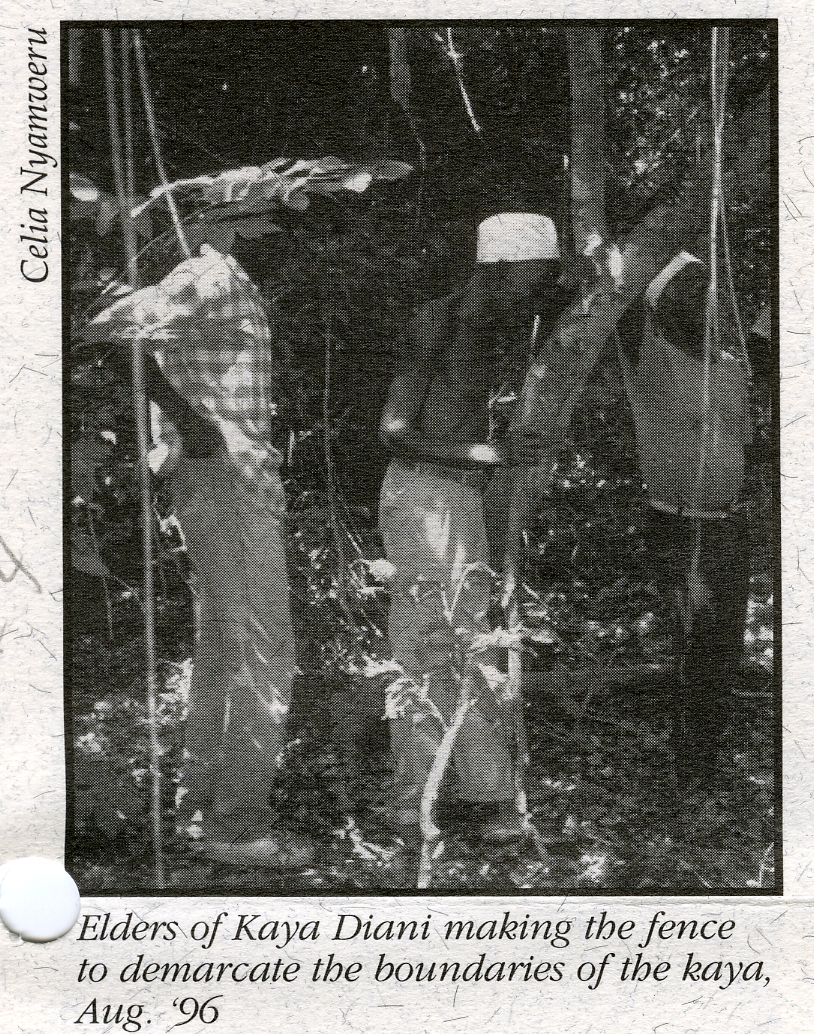 Celia Nyamweru taught at Kenyatta University in Nairobi for 19 years before joining St. Lawrence University in 1991. She is currently Coordinator of the African Studies Program there and teaches courses on Kenya, indigenous knowledge, famine, women in Africa, and pastoral peoples.