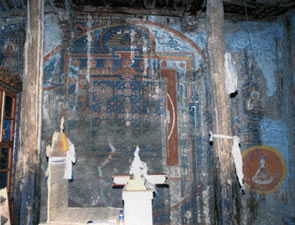 Significance: This remote Buddhist site lies in Northern India in the Ladakh region that was at one time part of the kingdom of Western Tibet. It is comprised of four Buddhist Temples dating from the 11th century and a number of stupas of which two are exceptionally significant. They are particularly important for archaeological and historical reasons and play a significant intermediary role between India and Tibet.

The group of temples has a collection of remarkable stucco sculptures and finely detailed wall paintings. It is one of the rare sanctuaries where the mural paintings and sculptures are contemporary to the foundation of the temples. The murals are rare examples in the region of Indo-Tibetan art.

The Threat: The temples and stupas are generally deteriorating from age, weathering, neglect and insensitive and inappropriate interventions resulting in structural damage some of which is of a serious nature. Some temple walls and traditional mud roofs are in danger of collapsing and important paintings and figurines are being lost due to water damage.