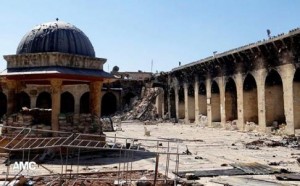 Official Listing: The Umayyad Mosque in Aleppo also known as the Great Mosque is part of a UNESCO World Heritage Site listed as the Ancient City of Aleppo and its historic sites. (1986)

Significance: The Umayyad Mosque has a shrine dedicated to Zacharias, the Father of John the Baptist. While the Great Mosque was founded in the early Islamic period, that is little left from that time. The Mameluke Minaret dates from 1090 and was considered, before its destruction, to be a very good example of the great period of Islamic architecture in Syria.