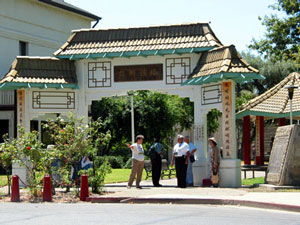 The Bok Kai Temple located in Marysville, California, is comfortably nestled in the curving embrace of the Yuba River near its confluence with the Feather River. It is the only Taoist temple in the United States with Bok Eye, the god of the north who controls water and floods, as the central deity. The temple is also unique because it has an active community of worshipers and the temple is still in the hands of a Chinese organization. It is further distinguished by its elaborate murals, which are believed to be the only example of their type in the United States.

First, it is helpful to look at a slice of California history in order to understand the importance of saving this unique sacred place. 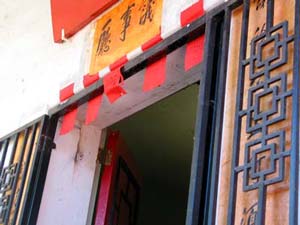 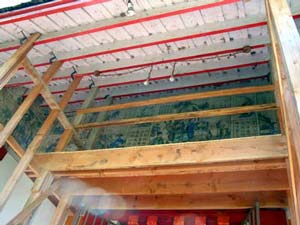 Taoism was the most common religion for most Chinese immigrants who arrived in California. Taoist temples, like the Bok Kai Temple, were important spiritual centers for newly arrived settlers who would go there to honor the various gods, seek their guidance, and remember departed relatives. Worship involved silent prayers before the altars, offerings of incense, and, on special occasions, offerings of food and drink. Paper offerings were burned as a way to transport items like money or clothing into the spiritual realm. Prayers were often accompanied by written questions asked of the deities. The questions would be burned on the altar and an answer might be obtained by consulting the divination sticks, which were interpreted by the temple’s priest or deacon.

Taoist temples also functioned as social centers and included council rooms for meetings. The first and the fifteenth day of the lunar month were considered days of worship when the community might gather together. 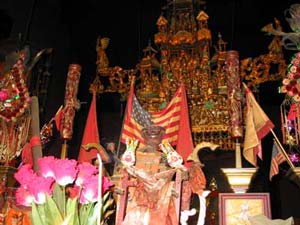 In the spring, most temples held a ‘bomb day’ named after the firework type bombs that are set off during the festival. The Bok Kai Temple is the only temple in the United States that still celebrates Yee Yeut Yee or Bomb Day, a celebration dedicated to Bok Eye. The temple has been observing this religious festival since its dedication in 1880 only interrupted by the two World Wars and a revolutionary war in China. It is usually a two-day festival held on the second day of the second month of the lunar year, or on the weekend following the date.

The religious ceremonies centering on the Bok Kai Temple draw visitors from throughout North America to worship there. It is a time when worshipers can commune with Bok Eye and discover what kind of fortune the New Year will hold for them. In addition to his abilities to control the rain and floods associated with good harvests, he is known to drive away evil spirits.

The highlight of the event is the one hundred bombs that are exploded during the festivities. These are filled with “good fortune” rings that represent good luck during the coming year. People rush to retrieve the rings, which are kept as good luck talismans. An elder in the Chinese community makes the bombs by hand under a special permit because they are no longer available for import from China.

The Threat & The Plan for Restoration 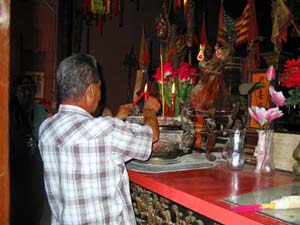 The Bok Kai Temple and its religious and cultural significance remain a testament to the vibrancy of the Marysville Chinese community. The Temple and its treasures are, however, in an endangered state from age, weathering, and its proximity to the river. There are large cracks in the murals at the entrance to the temple, pieces of the plaster are falling off the walls, and the structural supports and the floor of the temple have been greatly weakened by water damage.

The Friends of the Bok Kai Temple have raised $30,000 for the restoration project, but the entire project will cost well over $1 million. The temple’s inclusion of the National Trust’s 11 Most Endangered Sites List has brought welcome attention and funds from the Trust and the California Office of Historic Preservation totaling $18,000. 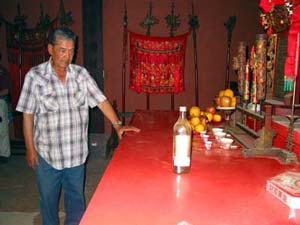 The project is to begin with a structural report from an engineering firm. Once that is completed, more will be known about how to proceed with the actual work of shoring up the building. Plans are being made to relocate the contents of the temple so that work can begin. Athena Randolph is coordinating the restoration and she needs to secure funding for cataloguing the contents, and moving them to a safe storage facility.

Other goals include the creation of a museum near the temple to house the temple’s collection of artifacts along with exhibitions about the history of the Chinese community in Marysville.

As of 2012, the temple was fully restored and a Kickstarter campaign will begin in 2015 to raise funds for a museum to house the many artifacts that are stored in the backrooms of the temple.

How You Can Help

You can send donations to the

The temple is open by appointment unless you visit during the Bok Kai Temple Festival. Call well in advance to arrange a tour: 916-715-7719.

This year the Chinese Community received a grant from Proposition 40 and The Friends of the Bok Kai Temple supplied matching funds for the grant. Further restoration work will begin in April to continue preserving the temple.