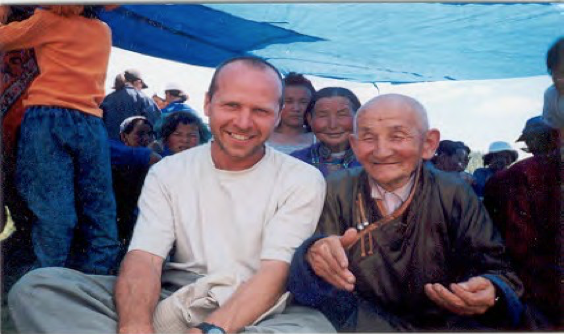 In 1998 I was invited to Baldan Baraivan, Mongolia, at the request of 97-year-old Lama Tovuu. He had studied at Baldan Baraivan as a young boy and witnessed the destruction of the monastery and the atrocities of the communist regime when monks and lamas were put to death or sent to Siberia. Lama Tovuu was sent to a labor camp but sometime in the mid-20th century, he escaped and returned to his home in Mongolia where he survived by becoming a shepherd, but never forgot his religion.

In 1990, when free elections heralded the tolerance of religion, Tovuu returned to Baldan Baraivan free once again to practice Buddhism. He and a small group of elderly monks began to teach some young boys from the area. Tovuu, supported by some younger monks, put together an ill-planned campaign to have the monastery restored. Through unusual circumstances I was sent a, low-quality Xerox, a copy of a document pleading for the restoration of this monastery.

But, Lama Tovuu lived to tell me of a dream he had earlier that year.

Less than a year later I found myself sitting face- to-face with Lama Tovuu, in his ger (yurt) at the opening to the Baldan Baraivan valley. He spoke about how the spirituality had been stolen from the younger generations who were unable to grow up and live in a Buddhist community. The lama had been sick and near death through most of the past winter and many of those around him thought he would soon pass on. But, Lama Tovuu lived to tell me of a dream he had earlier that year. He said he saw a man from the West who was going to come and rebuild this monastery. Somehow, being suspected as the person from the lama’s vision did not help my feelings of anxiety.

But, with his complete passion and devotion to Baldan Baraivan, he convinced me that this project was worth undertaking. When I reached out to say good-bye, I realized that his tears were falling softly on my hands. My interpreter said that the lama’s tears were tears of joy because he was now confident that he would one day gaze upon the restored temple.

Although Lama Tovuu passed away  in  the winter of 1999, the work continued under the supervision of Tovuu’s 22 year-old pupil, Guree. The Cultural Restoration Tourism Project that I founded went on to restore Baldan Baraivan with the help of volunteers from around the world. Even so, it is Lama Tovuu who deserves the thanks for making this restoration project possible.